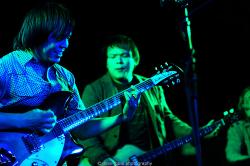 The Little Ones, with Other Lives and What Made Milwaukee Famous

This show was immediately on my must-go list the moment it was announced on the Little Ones' MySpace page. It wasn't on a weekend so I had to sacrifice a half day of work and made the drive down from Vancouver to Seattle for this. At least the gas prices were easing down.

I hear the The Little Ones on regular rotation on somafm, an internet radio station based in San Francisco. Given that the band is based in Los Angeles, they're going to get their fair share of airplay.

Also, the band just released their first full length (Morning Tide) on Atlantic records last month and is on tour to support it.

I came to the amazing revelation to learn that band members Ed Reyes and Ian Moreno were former members of the band "Sunday's Best" that formed in 1997. I'm more familiar with Sunday's Best and I wondered what happened after they released the amazing "Poised to Break" album back in 2000.

Back to the show. Other Lives, from Stillwater, Oklahoma were the first openers. They played a very low-key folk rock set that reminded me of my any regular house band on a weekday pub night. However, what set them apart was the playing of their celloist and violin elements. I was almost ready to write them off as just another usual folk band from the Midwest but the songs grew on me toward the end of their set.

By the time What Made Milwaukee famous (WMMF) played they were met by a more charming crowd reception. They have a friendly connection to Seattle with Barsuk Records, which they graciously acknowledged.

The band just released a limited time free five-song EP called the SugarHill Sessions on Barsuk. While the songs are good and pretty much stripped down, their live set has more to offer. The stage lights were on full bright and the band looked to be having a blast which fed off the crowd.

The Austin, TX based band pretty much play a no nonsense southern tinged kind of indie rock/pop that you don't have to take seriously and throw back a lot of beers unapologetically without having to think what's next. The band demands you have a good time and it looked like they were too like playing in front of a (sorta) home crowd.

The song that stood out the most was this awesome pop number called "Sweet Lady" that revelled the crowd.

The Little Ones were not going to get away with just a quiet, happy, and receptive Seattle crowd on a Monday night. Something happened when the last song came on as a throng of folks danced their way to the front and jumped to the lyrics of the song "Morning Tide" – "a modern morning tide, you rise and fall aside on sunday…Sunday! Sunday!….

They continued to dance throughout to the encore of the hit song "Lovers." It was a Monday night but that sudden burst of pop goodness felt like a Sunday.

Face The Facts
Oh MJ!
Ordinary Song
Gregory's Chant
Cha Cha Cha
Tangerine Visions
Like a Spoke on a Wheel
Rise and Shine
All Your Modern Boxes
Everybody's Up To Something
Waltz
Morning Tide
——————————
Lovers