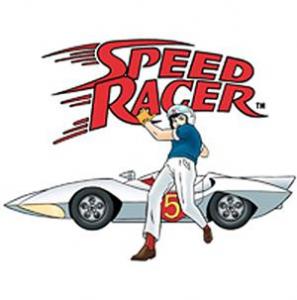 "The Theme from Speed Racer" by Matthew Sweet

I find that I have to spend a surprisingly large amount of time explaining myself to people about my love of Matthew Sweet. I have seen the man perform live only five times (none since 1999) — let me tell you, never have I seen such a heroic intake of beer as Matthew Sweet at the Iron Horse in Northampton, with no apparent ill effects to the man — and a number of his albums I think might be the best of the 1990's (well, mostly Girlfriend and In Reverse).

He's underappreciated mostly for the fact that he was so unabashedly power-pop and that, in itself, is a crime. So, you'd think that Matthew Sweet covering the theme song from Speed Racer would be a no-brainer for me, and, well, you'd be right. I used to get up at 6:30 A.M. when I was a wee tyke so I could watch Speed Racer (by the way, the fellows who did The Matrix are currently working on a big screen Speed Racer) on a little black & white TV getting fuzzy reception from the Boston area UHF station (WLVI Channel 56?) that broadcast the show (and if that doesn't date me, I don't know what will) and even then I knew, "wow, this song is cool." It is not like no bands have covered the Speed Racer theme before, albeit most have been terribly covered, but luckily Matthew Sweet hit the right combination of kitschy beauty and rollicking "one-take-ness" that is fitting for the theme.

I think this was only released as a B-side from one of the Girlfriend singles and it also amplifies Matthew Sweet's apparent love of old Japanese anime, with his bizarre yet freaking great video for "Girlfriend", so who better to cover a classic song of 1960's anime? No one, that's who. (Now, if only Mr. Sweet would stop trying to be Jimmy Buffett … *sigh*.)