The Notwist at Neumo's

“Is that a Wii controller he’s playing?” It was and that was the question I overheard repeatedly throughout The Notwist’s set Thursday night during their riveting show at Neumo’s. Actually there were two Wii controllers that electronic programmer Martin Gretschmann was playing.

The Notwist is a German band who has been around for nearly twenty years and their set on Thursday delved mostly from their two most recent albums, 2002’s masterpiece Neon Golden and this year’s The Devil, You + Me. They have amassed quite a large cult following over those years and Neumo’s was packed with those (super) fans. If the show was not sold out, it was very close to it.

The Notwist (which I learned was pronounced No-Twist that day) came on the stage at 10:30 and they played their melodic, electronic pop rock for about 90 minutes. Many of the songs were descended into intense, extended instrumental jams that showed off their considerable skills with their respective instruments. At times, it was gorgeous but compelling throughout the set.

It seemed like each member of The Notwist was in his own world. Only during the absolutely final song (“Gone Gone Gone”, also the final song from The Devil, You + Me and performed this night at the end of the second encore) did they seem to acknowledge one another on stage. Yet, the music the made together live was perfectly in sync. They used a lot of effects as well as children’s toys to compliment their sound. Besides Gretschmann’s use of Wii controllers to man his sequencers, he also was experimenting with “Thunder Tubes” during one song.

Singer/guitarist Markus Acher has a soft, delicate voice that really sounded well in the confines of Neumo’s. It was the one facet of their songs that sounded similar on both record as it did live. That he sings so well keeps the band from being labeled as “experimental.” They experimented with different takes for most of their setlist, liberally using loops and effects. Even live, though, you could hear the multi-layered intricacies that they used to craft their songs.

The reaction from the crowd through most of the night was rapt attention. They applauded wildly between songs but were quiet while the band was performing. It was obvious that this is a very special and important band to many people who had been waiting several years for the chance to see their band live. With their homes being in Germany and it being about six years between LPs, The Notwist doesn’t make too many trips to this side of the planet and they surely weren’t disappointed. It felt like the biggest applause came from “Gravity” and “Consequence”. The latter was a most pleasant surprise because it was just before midnight and the band had finished their encore and people were filing out of the club satisfied, thinking the show was over. Instead, the band quickly came back on stage to treat their fans to another pair of songs.

Nearly every review I’ve read of The Notwist mentions that their sound has evolved from a much more aggressive rock band to one that is more down tempo and melodic, focusing more on songcrafting (while the lineup has remained fairly stable for almost two decades). This Thursday fans were treated mostly to numbers from the last two albums and exclusively for the two encores were made up of “Good Lies” and “One with the Freaks” for the first and “Consequence” and “Gone Gone Gone” for the second).

The Notwist put on a very fascinating set that pleased the crowd greatly. I think the last time the band played in Seattle was in 2003 at Chop Suey, so many people were waiting over five years between shows to see them (and, of course, longer – this was my first Notwist show). From the mood of the crowd for the night, it seemed like they would wait another five to see them again, but really don’t want to wait that long.

Here's a photo of Gretschmann that my friend Heather B took on my camera with his Wii controllers: 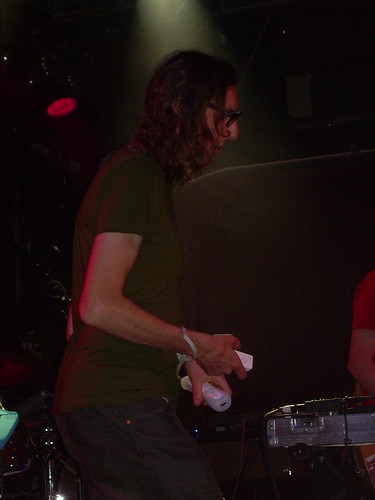