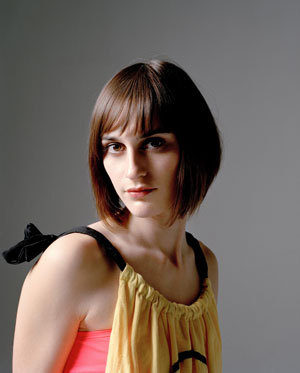 I don't know why I continue to do this to myself. I already have my tickets and guest list spots for the Crystal Castles and Lykke Li shows (respectively) at Neumo's on Tuesday and Wednesday nights and I get up very early for work each day, but I can't also miss Yelle at the same club on Monday night, either.

Yelle is Julie Budet, an uber sexy French disco star who rhymes (in French) over some pretty catchy 4/4 beats. Most of the time I have no idea what she's saying without going to a French/English translator but it sounds catty and fun (bitchy perhaps, but in a good way).

Yelle is said to be an acronym for "You Enjoy Life". If there aren't a million other reasons for me to be in to her, she also has the endorsement of my favorite pop star in the world as she made her UK TV debut on the BBC's "Lily Allen and Friends":