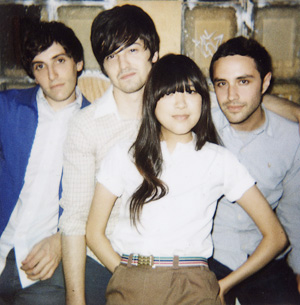 The Pains of Being Pure at Heart's new video: Everything with You

I've really been loving this song – and especially this video (shot on glorious Super 8 film). It's from The Pains of Being Pure at Heart, who are a promising new band from New York and this is for their single "Everything With You" – which is available as a 7" but will also be included on its forthcoming self-titled LP in early 2009. February 3 to be more specific.

This song (download by right-clicking here) has a noisy melody that blends well with the dueling boy/girl harmonies. It's a very catchy and well-produced indie pop song.

The video was directed by Art Boonparn and as Pitchfork described it when they premiered the video yesterday as, "it follows two likable young women goofing around and having adventures. In indie pop, it's always OK to have a best friend."

All the visual deliciousness is here: