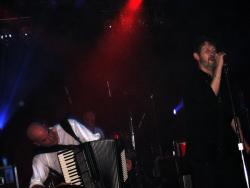 The Pogues: a bit bittersweet

I should preface this review with a full disclosure that I originally had no intention of going to see The Pogues this past Thursday. At $60(!) a pop for tickets I was not prepared to plunk down that kind of coinage to see what, frankly, might amount to a full blown train wreck with the desicated viscera of Shane McGowan strapped to the front of it.

I, like many of my generation, am in the unenviable position that most of the bands that I am truly inspired by peaked and imploded waaay before I would have had a chance to see them live the first time around. So instead, over the last five years, we've seen a veritable cottage industry of first generation punk / new wave / et al tours that take people who were once snarling visionary lunatics oozing sex and danger and various illicit substances out of every pore and haul them back onstage to perform anthems of youth and vigor now that they are nice, quiet settled down people approaching AARP status with kids (or grand kids) and a mortgage and a nice cottage in Sussex or something. Leaving out the bands that are still the same group in name only and are just too sad to even comment on (The Misfits, etc.) and the bands that don't really fit into this category because they never really went away and evolved and are still brilliant (The Mekons), going to see a band that was defined by their wild youth as safe old people is a pretty dicey proposition. For every Stooges or Banshees reunion buoyed by the seemingly ageless physical and psychological presence of an Iggy or a Siouxsie, there are a dozen disappointing Echo & The Bunnymen, Blondie or Sex Pistols cash-ins. There are very few reunion shows I've attended that leave me thinking more about the show I just saw than the shows from long ago that I didn't see.

In any case, I digress, but the point is that I wasn't planning on going to the show. However, when the lovely Imaginary Dana and her equally lovely fella Imaginary David offered their tickets to Thursday's show to me and my girlfriend Melissa (I am guessing based largely on the strength of our rendition of "Fairytale Of New York" at last years TIG Christmas Karaoke Party), we leapt at the opportunity, because even a trainwreck is worth seeing if it's legendary and free.

I can gladly report, however, if I can ever get to the goddamn point, that The Pogues performance certainly did not classify as a trainwreck. It was, however, still a bit bittersweet, which, I suppose, a Pogues show should be. The crowd was a quite heartwarming mix of punks, greasers, skinheads and folkies of all ages and once the band hit the stage the pit was unrelentingly rowdy, in a good natured sort of way. The sound was a bit weirdly mixed right up front unless you were smack dab in the middle and, as I myself am not as young as I used to be, we moved further back to where we could both see and hear the band a little better without taking a stray elbow to the temple.

The band stuck mostly to songs from their first 3 albums, with a few post-MacGowan numbers thrown in, mostly, it seemed, to give Shane a chance to rest. I could fill this review with a lot of hyperbole describing how tight and energetic the band was, which they were, and, frankly there have been so many Pogues members over the years that getting that many of them on stage together, let alone throwing Shane into the mix, is quite an accomplishment. Frankly, the main draw of this show was seeing him back onstage with The Pogues, so let's talk about that, shall we?

In a way, because Shane always sounded a bit like a 70 year old alcoholic junkie with no teeth, it seems a somewhat logical transition to the fact that he is now that character in reality, even though he is barely 50. The crowd seemed to pay no mind to the fact that they were seeing the wreckage of a man before them, merely the fact that he was standing on two feet seemed to be satisfactory. He has the taut, bloated, too-white skin of someone with late stage cirrhosis of the liver and his lips curl back into the chasm of his mouth where even those legendary, cockeyed shards, once the butt of so many jokes, have long evacuated. His singing voice was still quite strong and emotive and intelligible, inasmuch as Shane MacGowan can be intelligible, but when he spoke briefly between songs, it was nigh imposible to understand him. He seemed tired, even on the second night of the tour, moving slowly to his position behind the center mic and staying relatively motionless, save to make a few perfunctory, arthritic gestures with his top hat from time to time.

None of these statements are meant with any cruelty or humor, just a profound sadness. In a way, the Pogues' songs, so rich with characters who've been wrecked against the rocks in the ocean of their own lives, were given added poignancy that night by the presence of MacGowan, singing all his self-fulfilled prophesies of twenty years ago with something that hovered between resignation and defiance. In a way, the sadness made the show more beautiful.