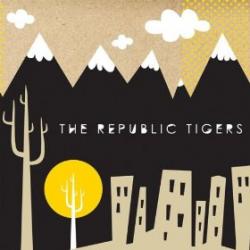 It seems that Alexandra Patsavas’ 24-carat gold finger and borderline monopolistic foresight have yet to wear out. Since signing to the music-supervisor-by-day’s own Chop Shop Records, The Republic Tigers have embarked upon a gluttonous publicity run (Letterman, opening for Travis overseas, etc.). Hopefully they’re wearing their bibs, because it is well deserved.

The catalyst for it all (including the band’s recently released full-length, Keep Color) was a Herculean, four-track eponymous EP. Anchored sturdily by its opener, the appealing but not-too-poppy “Buildings and Mountains,” the short player has a decidedly narcotic tinge, playing freely in the production pool. The resulting waves offer a sort of controlled ambiance.

The number of layered vocal tracks on the multifaceted freakout “Sinkin’ Annie Down, Down, Down, Down” (it has to be in the teens at least) strikingly magnifies the abilities of singer Kenn Jankowski, and makes “Buildings and Mountains” seem almost restrained. Differing verses intertwine simultaneously at varying pitches and rhythms, flirting with electronic blips and reuniting only briefly for what one has to assume is the chorus. It borders on Animal Collective territory, albeit gingerly.

“The Drums,” however, trumps all with its blessed balance of production wizardry and unfailingly original composition. And then, to further tilt its nose at conventional EP rules, the disc unwinds with a stellar instrumental piece, incorporating a chillingly simplistic piano hook into a mesh of acoustic guitars and accordion – or something like it. The Republic Tigers EP is really able, unlike the first offerings of many other bands that follow the same progression, to stand on its own, rather than as a precursor to something more.

That, my friends, is how to launch a career in under 20 minutes.