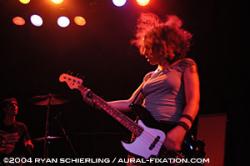 This is definitely the "Summer that Rocks and Rolls™" and the clear-leader of the movement is The Thermals.

They've just released their brilliant second album, Fuckin A and the Portland trio is currently on tour to spread the good word {and sounds}. Music fans far and near should don their tank tops and rejoice! It's going to be "A Very Thermals Summer!!!™"

And I am thinking that it will go beyond just the season. This could be "A Very Thermals Year!™"

These Thermals are hot young things with a lot of fire under them. The new release is incredibly strong and really captures the energy they have on stage. I am thankful to have a new collection of many way-too short-songs that make me what to pop wheelies and drive too fast {not that I ever do that, Officer}.

Fuckin A is true to its name. I want to curse like mclusky it is so amazing.

Picking a standout favorite song on the new album is difficult… but I can do it… really, I can.

The lustful immediacy of "Stare Like Yours" is heard throughout the album. Hutch Harris's enunciation only intensifies the ferocity of each earnest word spewed in their pointed songs. Their songs are both comforting and intense.

The song I lovingly call "the cough song," "End to Begin" is catchy.

Who would've thought a lyric of "HACK HACK it up" could be so beautiful?

I like the most political song on the album, "God and Country." And the song that starts off like a dance hit, "Let Your Earth Quake, Baby." It IS hard to pick a favorite!!!

Fuckin' A is like a candy shop. Which is my favorite!?! I could lose days internally debating it in my head. Thank goodness I have seven more months to decide which song will go on my best of the year mix cd. Yes, you heard it. The Thermals album is barely born and I am ready to proclaim it a top contender for "Album of the Year!"

I agree! I've been reading some of the reviews of the new album and am confused. How could anyone NOT think it was brilliant? Like tiny mix tapes {a website I love love love!!!} only gave it a 2 out of 5 stars! They called it a, "perfect example of indie laziness and indolence." I don't pick up even the slightest note of underachiever in the album or their "stage show."

May I be so bold as to say that they take what the White Stripes are trying to do {minimalist, no over-dubbing allowed} and make it smart, stylish, and as timeless as the first Ramones album? They lack the White Stripes wankering/noodling/over-posturing that has turned me off of all things Jack and Meg.

I am not going to agree with any of that anti-White Stripes crazy talk you're spewing… but, I am right there with you on the overachiever/ smart/ stylish/t imeless/ Ramones thing. I think the album is an exploration of minimalism and raw-energy as craft. I suppose it is expected that some folks would take a misguided, over-analytical stab at the sophomore effort and confuse the Thermals' organic approach with laziness.

I attribute our special ability of being able avoid such a quick-tempered critical sandtrap to our admitted infatuation which stems from witnessing their live performances on numerous occasions.

I am not sure what the most addictive ingredient of the Thermals music is.

Is it Hutch's leading man mystique and ability to have the most complex of alliterative chants roll off his tongue while jumping to and fro?

Or Kathy's ability to effortlessly play the bass and be the model of sweet and kind hipster chic?

Or Jordan's impassioned drumming and a big sweaty comforting smile that he flashes after each song?

I can't even begin to determine exactly what it is about them that makes me randomly shout "Fuckin A!" many times a day… but at this evening's show, they lived up to the album's exclamation name.

One of the good things about having such short albums and songs {the average time of the last two albums is +/- 30 minutes} is that they were able to play most every Thermals song ever written. Over the course of 1.25 hours, they played everything from the spanking brand new "Top of the Earth" to their oft skipped over theme song {currently only available on the No Culture Icons ep}.

Their set was so tight… it's unbelievable that they haven't been playing those new songs for years. This was the most comfortable I've seen them on stage. They effortlessly flowed from new song to new song to old song to new song with no uncomfortable gaps or forced banter. It was our own joyous Thermals marathon set. I felt wonderfully pummeled.

They were all in top form… but my favorite part of the show was that intentional bass feedback Kathy was getting throughout the set. That was the hottest EVER! I've been driving my neighbors insane trying to be so bass-feedback-savvy ever since.

Is that that noise in the background whenever I call you?

I thought was your neighbor practicing with his "experimental" theater group!

Yea, um… well… so… anyway… can you believe our luck! We not only got to hear the new album, LIVE, the DAY BEFORE the album released to the general public… we got to end the evening by purchasing copy(ies) to take home and send to our less geog
raphically fortunate friends in other places. "Fuckin A! It's a Very Thermals Summer!!!™"