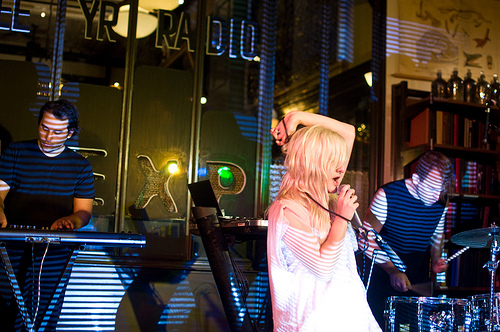 These are a few of our favorite things: best festival photos and moments of 2011 {pt. I}

2011 was {is still!} a great year, not only for releases but also for live shows, festivals, and those grit-of-the-stage-under-your-fingertips kinds of moments that we have all come to love and live by: nights like The Head and the Heart blowing the roof off of Porterhouse in West Seattle, a few sweet Lovesick Empire sets, John Darnielle's solo show at UW, and some incredibly intimate events like David Bazan's performance at Barsuk Records and some killer in-studios at KEXP. And with that said, here's the start of {one of} our 2011 countdown, featuring our top moments and photos of the 2011 festival circuit: 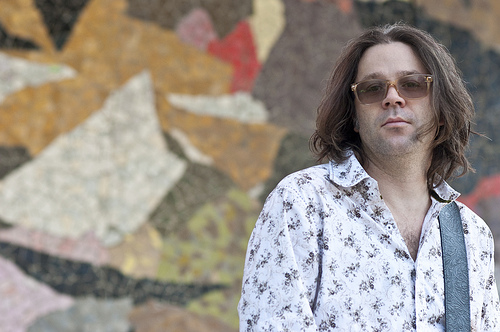 Favorite photo #10: Andrew McKeag :: Whether he's taking a big stage with his regular band {The Presidents of the United States of America}, holding court as a Honky, or anything in-between, this man simply does his thing with an understated level of skill that most musicians can only hope to attain (and manages to look pretty damn good doing it, too). Pictured above as part of the Kasey Anderson and the Honkies set at this year's installment of Bumbershoot, Andrew made us pretty happy to have gotten to the 'fest in time for the early bands that day with this dead-on look into the lens. {more KA&tH shots from the 'shoot} {POTUSA official} {KA&tH} 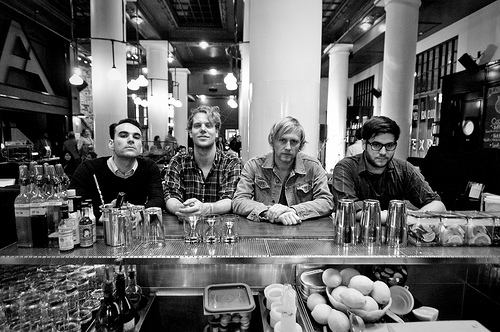 Favorite moment #10: WATERS :: Maybe it was just that moment — being New York City for a few days and suddenly realizing that the city has basically charmed your pants right off, and being totally okay with it — in conjunction with some incredible live sets day after day after day,  but we really, really did very much dig the WATERS set that went on as part of KEXP's broadcast from the Ace Hotel for this year's CMJ. It was all those things you hope for from an indie rock band: big guitars, a cohesive sound, and an overwhelming sense of want-more! once the music stops playing, all wrapped up in a surprise as we hadn't seen or heard them enough previously to know what to expect — get a taste of their glorious noise over at Stereogum, where a post this year offered a free download that's still up for the taking. {more photos of WATERS at CMJ 2011} {WATERS} 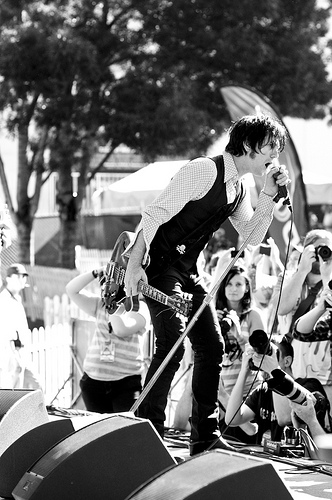 Favorite photo #9: Jim Jones Revue :: Man. What a fucking rock set. Even though it was early on in the day at Bumbershoot, these guys killed the stage like it was a packed house at one in the morning at the Mercury Lounge. Nine million photographers in the pit notwithstanding, we love this shot to the maxx! {more JJR Bumbershoot photos} {JJR website} 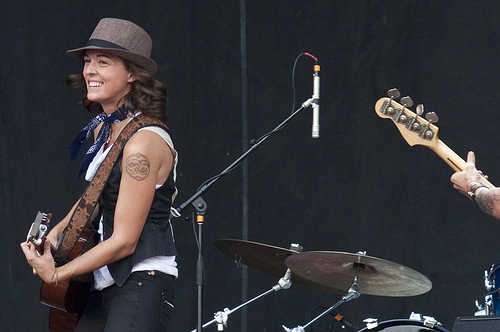 Favorite moment #9: Brandi Carlile :: Brandi + her band took to their early-lineup set at Austin City Limits this year like true champs, and performed the hell out of their time slot with a feel-good kind of reckless (but not too reckless) abandon like only they can do. It was well on the way to being hotter than hell, as was the case for the entire weekend — and the open-armed, cool breeze of this set washed over the crowd like a welcome mat of awesome, setting the tone for a killer time. {more shots of Brandi Carlile at ACL 2011} {Brandi Carlile Dot Com}

{Aside: you can experience this all for yourself Seattle-style this New Year's Eve at the Neptune, just mosey on over here to enter our ticket giveaway!} 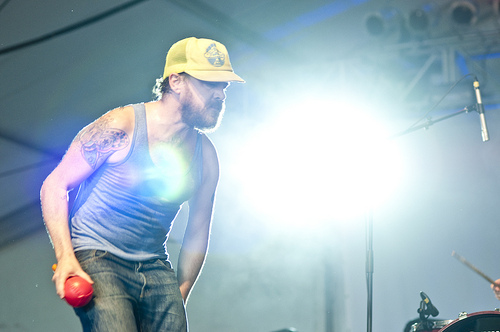 Favorite photo #8: The Cave Singers :: Sets by the Cave Singers are basically a rad-ass guarantee — they kickstart your heart as well as your feet, pull you in to an absolute trance of drum-guitar-blissyness, and are never not a good time. The Cave Singers set at Austin City Limits this year was all of those things and then some, with blinding lights and muggy, blistering heat in a partially enclosed tent packed to the brim of fellow enthusiasts. {more of The Cave Singers at ACL} {band site} 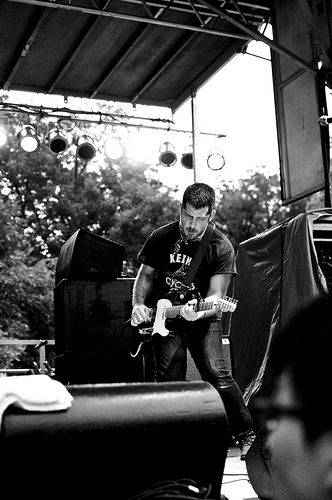 Favorite moment #8: We Are Augustines :: Just like Brandi Carlile's set opened up one of the unforgettable days at this year's Austin City Limits fest oh-so-perfectly, so did the boys of We Are Augustines on the closing end. The heat had finally started to subside as they took the BMI stage for their headline set that evening, and it was one of the only times during the entire festival where we found ourselves pretty much enraptured by a performance from start to finish. Every song killed, every moment rang out, and we could have easily spent twice the length of their set taking in everything they had to give. Not to future trip on 2012 too much, but we're already stoked about their Seattle & Portland dates in April!! {more ACL 2011 photos of WAA} {WAA official site} 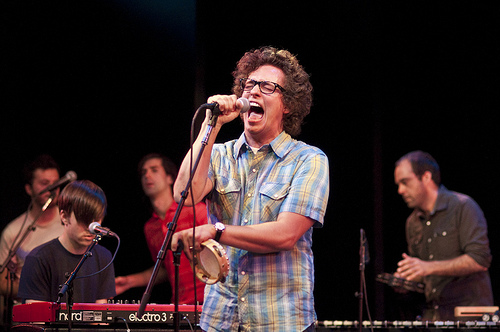 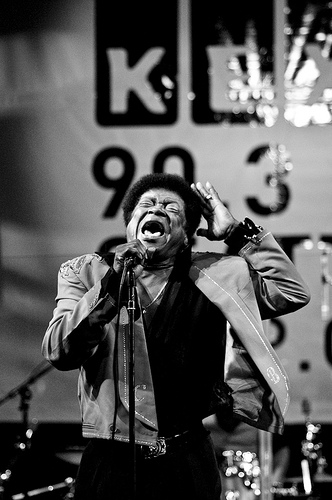 Both of our lucky-sevens come in the form of big-lunged beauty by way of KEXP's Music Lounge at Bumbershoot. Our favorite photo is none other than Galen Disston as he fronted an intimate set by then {and still}-exploding Pickwick, and our favorite moment came from the heart-wrenching pure-soul sound of Charles Bradley as he took the stage in all his sixty-something year-old "Black Swan" glory. Both performers filled the room with everything they had to give, and both photos grab that exact moment when we couldn't believe we were bearing witness to such a killer time. {more Bumbershoot 2011 photos} {more about Pickwick} {more about Charles Bradley}

Favorite photo #6: Zola Jesus :: Another list-making shot courtesy of KEXP's live broadcast from the Ace Hotel for this year's installment of CMJ. Zola Jesus put us into an absolute trance with their sound, short as the live set was — and the killer lighting setup made for a perfect vibe, all of which we managed to grab on to in this shot. {more ZJ photos from CMJ 2011} {Zola Jesus} 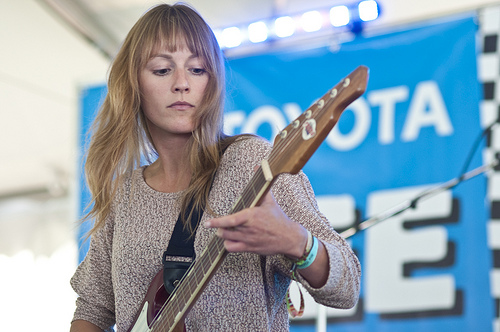 Favorite moment #6: Lemolo :: Closing out the first half of best-of-the-fests moments has got to be Lemolo's daytime set at Bumbershoot — again, it was early on in the day, but their one-of-a-kind sound coupled with their super-personal vibe made for an incredible start to that day's shows. And, fast forwarding to present time, the ladies of Lemolo are well into recording their full length, which we already know will be up on the top of our list for 2012 local (if not all-encompassing) releases. How great it's going to be to have all that bliss at our fingertips!!  {more 'shoot photos of Lemolo} {Lemolo official}

Stay tuned for our favorite fest photos & moments part two, as well as the rest of the best non-fest as well later this week!