These are a few of our favorite things: best festival photos and moments of 2011 {pt. II}

{This is part two of our one-two punch showcasing the best in festival moments and photos from 2011. Start from the beginning here, where you can see picks #10 – #6!}

Favorite photo #5: Wye Oak :: Standing in the pit at Sasquatch! at the small stage is always a treat — you're right up next to the performers, and unless someone's career has exploded between the time they got booked and the time the festival rolls around, there's not too many people mobbing the area surrounding the stage. Such was the case for Wye Oak, and while they were already a good, established band then with a solid crowd turnout, we were able to get up-close-and-personal for their set to capture this mid-song moment. If you haven't seen one of their many appearances — Sasquatch! 2011, the shows with the National at the Neptune last month, or from the "HOLY SHIT" file: that time they played with Shearwater at the Triple Door in 2010 — get out to see them on mid-sized stages while you can. {more photos from Wye Oak's set at Sasquatch!} {Wye Oak official} 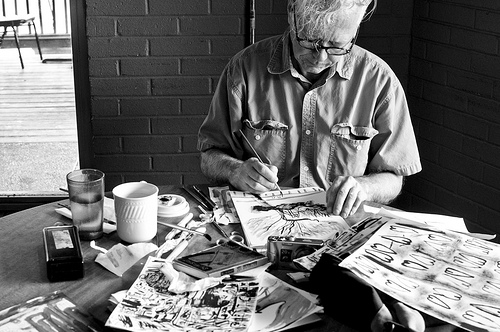 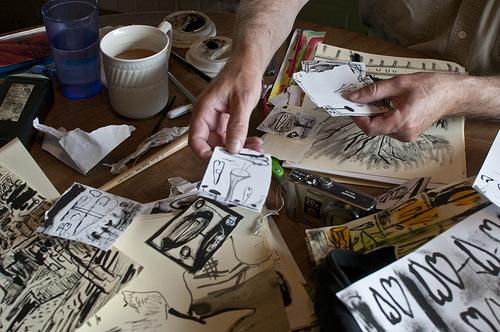 One morning, while loading up on espresso and bagels while uploading photos pre-fest on a hundred-degree day in Austin, we met Del. And as it turns out, Del is just an artist in a corner at a cafe, akin to those writing furiously in a notebook — only he doesn't blog it, "show" it, exist anywhere on the internet, or have openings in art galleries. This is just what he does, and after getting permission to take his photo and chatting with him for a bit, we learned that this inky artpile is Del's form of art-therapy journal-y processing. While it wasn't a We Are Augustines set or a moment in front of the stage with Elbow, it was nonetheless a highlight of our ACL trip and well-worth preserving here in our 2011 storyline! 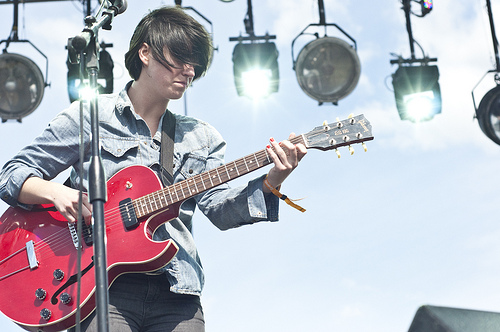 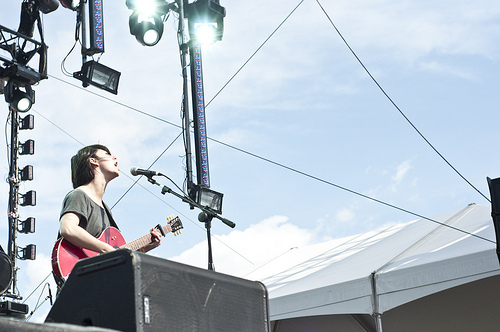 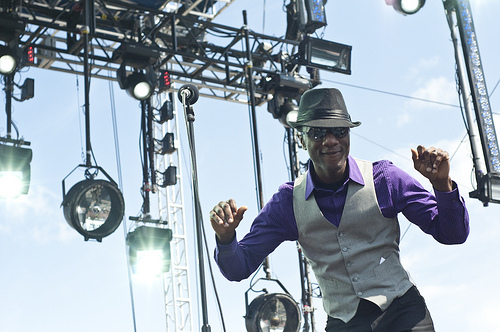 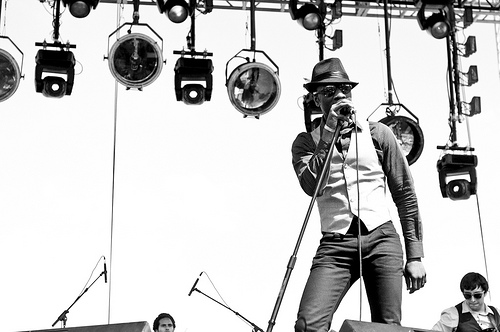 What an amazing, amazing pair of sets these two put on at Sasquatch! this year. Sharon van Etten's sparse, gut-wrenching performance rang out all the way into the darkest corners of our hearts where the best reverb lies, and Aloe Blacc held up to every expectation we had going into the set. The fact that they both looked good doing what they both obviously love {and are so, so well-suited} to do just made capturing it in photo-form all that much easier. {more Sasquatch! 2011 photos} {more about Aloe Blacc} {SVE official} 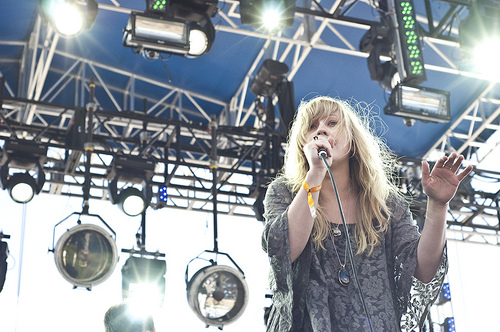 Favorite photo #3: Kaylee Cole :: This shot is from the start of the first full day of performances {technically day two of the fest} from this year's Sasquatch! up at the Gorge, when a handful of performers performed Radiohead songs with members of the Seattle Rock Orchestra, trading off lead singers every song or two during the set. If memory serves, Kaylee did a ridiculously compelling rendition of "Karma Police" — and we managed to grab this shot as she was tackling a particularly intricate, intimate moment. <3 {photos of Kaylee Cole at Sasquatch! 2011} {KC} 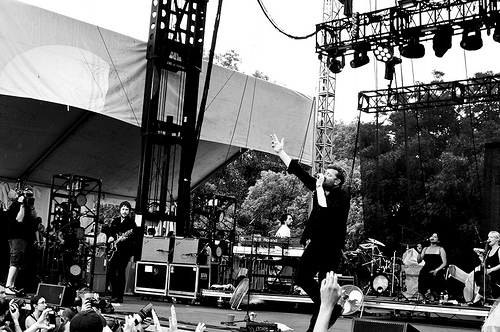 Favorite moment #3: Elbow :: Jesus Rollerblading Christ, you guys. ELBOW. E-L-B-O-W. It was another hundred-degree day at Austin City Limits, and we shit you not: when Elbow took the stage the skies literally parted, and a smatter of rainshower doused the throngs of people while broken streams of sun shot down through the overcast clouds. Not to overuse one of 2010's most hated phrases, but the set they put on was truly epic, heat and sweat and rainshowers and all. {more photos from Elbow's ACL performance} {Elbow official} 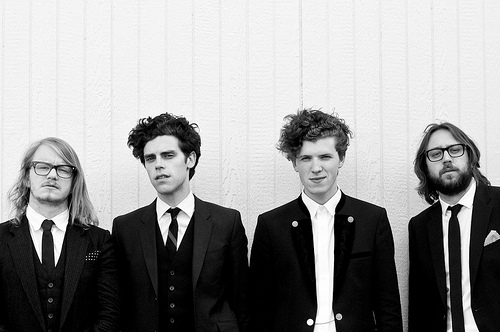 Favorite photo #2: Noah and the Whale :: This one was one of those totally accidenal, right-place-in-the-right-time kinds of moments. Noah and the Whale had just finished up an interview in the press room at Sasquatch!,  and were hiding out back behind one of the press lavatory trailers — due mainly to throngs of screaming fans, ps — when we stopped to pose them for this shot. It's worth nothing that they put on a great set, too, although it doesn't look like they'll be stateside again anytime soon. Keep an eye on their official page for details! {more photos of N&tW} {band site} 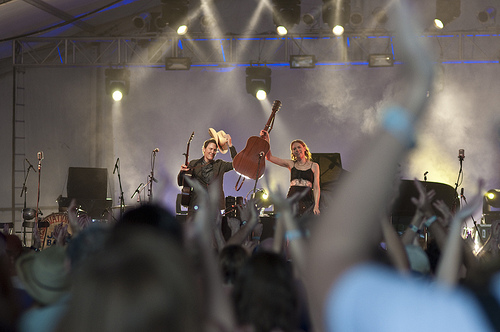 Favorite moment #2: Gillian Welch :: Another insanely brilliant, knife-in-the-gut moment from this year's Austin City Limits festival hands-down had be stumbling onto Gillian Welch's performance, which was at first abandoned by many casual fans — she was running about thirty minutes behind in a tent that was much too hot to consider standing around in. We snuck in about midway through and managed to weave halfway into the crowd just in time for "Miss Ohio", covered in goosebumps and forgetting almost every degree of the oppresive heat. In related news, we still can't stop listening to GW's most recent release The Harrow and the Harvest, which is making year-end lists and keeping ears and hearts sad-happy all across the land. {more photos of Gillian Welch at ACL} {GW official} 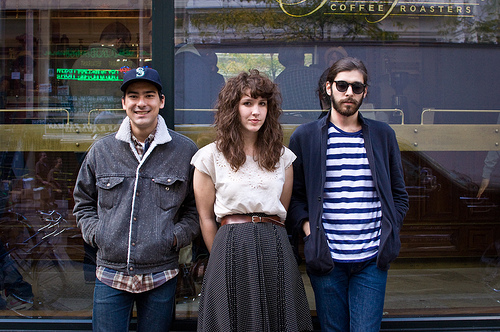 Favorite photo #1: Widowspeak :: Last but not least, our favorite photo from all the festivals we attended in 2011 is this one — an impromptu band portrait of Widowspeak on a sidewalk in New York City, just after their performance live on KEXP from the lobby of the Ace Hotel. The Stumptown is bustling them, there's passerby behind us on the street, and we were able to freeze them in the middle of all of it for a beautiful, sparse little moment. After having seen their incredibly compelling set a few minutes before this was taken — and if you were there or have heard their music, you know where we're coming from on this one — the personalities of the band really manage to shine right through in this shot. {more from Widowspeak at CMJ} {Widowspeak's bandcamp page} 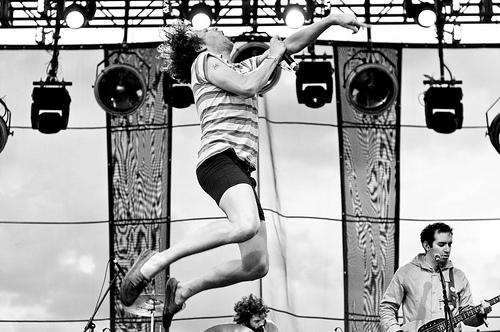 Favorite moment #1: !!! :: And to wrap up our very favorite festival photos / moments post, our absolute all-time best experience of all the moments put together in 2011 absolutely had to be the entirety of the !!! set at this year's Sasquatch!. The lead singer leapt and landed, danced his ass off, engaged practically every single person in the crowd, demanded the press be allowed to stay in the pit for as long as they wanted, mugged for the camera, and just performed the shit out of the set with every ounce of everything he had to give. Absolutely a non-negotiable, don't-you-dare-miss-it kind of performance next time they come through your neck of the woods! {more !!! photos from Sasquatch!} {!!!}

And that's a wrap on our favorite festival ishes of 2011 — coming up next, our all-time favorite non-fest photos and moments, which we could barely narrow down to twenty, let alone ten! Stay tuned!