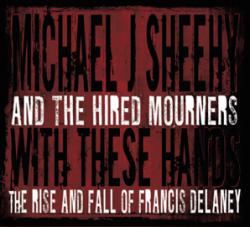 With These Hands: The Rise And Fall Of Francis Delaney

Perhaps the most underrated artist on the globe, Michael J. Sheehy, who fronted the stellar (and criminally unknown) London band, Dream City Film Club in the 1990s, has emerged with a brilliant new album that is a song cycle about a boxer named Francis Delaney. The record explores his rise to prominence and details a sad downfall in which the fighter ends up with brain damage known as dementia pugilistica. In the course of fourteen tracks, Sheehy tells the tale through the eyes of several characters, each of whom add their own perspective to the narrative. Musically and lyrically, the album is a compendium of his solo career as several previous songs are alluded to throughout. In typical form, the record is both beautiful and profane, traits of Sheehy’s that make him so unique.

With These Hands opens with a song that provides the general story as an afterthought in the form of “Did You Hear About Delaney?” Here, we find out that Delaney took a dive in the ninth round of a title fight, a move that he made for money, which not only soiled his reputation, but also ruined his career. The song is intoxicating with its reverb guitars and Hammond organ. Musically, it sounds like a cross between Nick Cave and Tom Waits.

Delaney’s early years in London are outlined in “Medal Made Out Of Tin,” a somber track that carries a folk melody not that dissimilar to Waits’ “Innocent When You Dream.” A poor child, Delaney was a gifted athlete who fell into boxing and gained self-assurance when he won his first boxing medal. It was this incident that set up his rise to notoriety.

Themes of 1950s racism are referenced in several of the songs as well. With boxing being the brutal sport that it is, Sheehy creates the lyrics with a harsh honesty that is at once disturbing, yet at the same time realistic considering the time and subject matter.

The album ends with a succession of heartbreaking songs. “Frankie My Darling” is a gorgeous ballad sung from the perspective of his girlfriend and features lead vocals by Gemma Ray. “When Did We Grow So Old” is a devastating song that is conveyed by a friend at the end of their lives. The song recalls their youth at a point in their lives when they are feeble and unknown. It is a horribly sorrowful take on old age especially with the direct closing lines: “Once we were young and spry/Now we just wait to die/When did we grow so old?”

With These Hands is another masterpiece that is likely destined to become a cult record for an esoteric audience. Sheehy has an amazing voice and talent, however, and this album highlights it as well as any of his others.