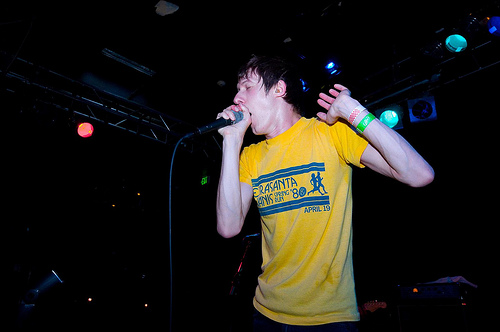 In the past lives of Past Lives, the geneology includes four former members of the notable post-hardcore band The Blood Brothers.

What Past Lives does musically, is to forget the lineage from Blood Brothers and create a new sound that is built especially around the art-rock guitar parts from Devin Welch (who also was in Chromatics and Shoplifting) and Morgan Henderson. The vocals are almost secondary to the instrumentation that blends math rock precision with a level of punk noise and some occasional chaos for good measure. The band has played several high-profile shows since the first time they took a stage in early 2008. The most recent show I caught was when they opened for Murder City Devils and the intensity and noise made for a perfect compliment to the legendary Northwest rock band.

Here’s a video of Past Lives playing their song “Beyond Gone” at their second show ever, opening for No Age and Liars at the Showbox:

Past Lives play Bumbershoot at EMP’s Sky Church on Saturday, September 5 at 3:30pm.

{Past Lives photo by Chona Kasinger from TIG’s Flickr Pool.}