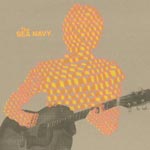 With nine songs clocking in at about 22 minutes, Oh These Troubled Times slams, bams, and thank-you-mams a competent Ted Leo-inspired rock for about 11 of them. The other half focuses more on the pondering side of songwriting — that being the type of punkish-rock where acoustic guitar, nasal passages, and a snare drum make up the requisite tools. That in mind, the more contemplative side of the The Sea Navy explores the perils of slamming and bamming in general: "I don't want to come home tonight cause I'm scared," Jay Cox sings in "Action Above 12th," a lovely track bringing together myriad bits of the trio's past projects into one concise pop song.

Overall, The Sea Navy does what all bands try to do: play damned good songs, and enjoy the hell out of doing so. That's to be expected, given the work of the fleet's collective past. Lead singer Cox relocated from Boston to Seattle, leaving behind the excellent Polyvinyl group, the Ivory Coast. Once in our fair territory he met up with Andrew Rudd, once-drummer of Barsuk-bred Aqueduct. The two of them then found a producer-slash-bass-player in the likes of TW Walsh, a Pedro the Lion/Headphones divorcee, who engineered the recording of Oh These Troubled Times and fleshed out the group's line-up.

Since the fall of 2005 when the Sea Navy first set sail for the studio, they've paddled around Seattle venues playing at every opportunity, and eventually losing Walsh on bass and finding an able replacement in Washington D.C.'s Stuart Fletcher.

A year after recording their debut, Oh These Troubled Times introduces a new rock band covering much of the same ground they've covered with their past groups, but with a different line-up, and showcasing that unreplicable enthusiasm that coats a debut record. The shorter review is this: The Sea Navy is a very good local band, with a very good new record. Santa's added them to the "nice" list this past year, and so should you.