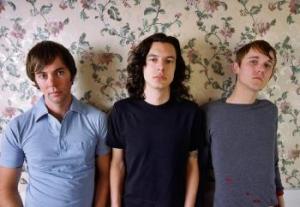 Are These Arms Are Snakes the hardest working band in Seattle?

Fresh from a 10-month long tour stint, from Europe to the US to Europe again, I caught up with These Arms Are Snakes' guitarist Ryan Frederiksen and bassist Brian Cook at Capitol Hill's basement-esque bar Redwood the night of August 22nd. This summer was no vacation for the hardworking local band; besides touring nonstop, they also took the time to hit the studio for a never before announced track for a cover album and planning a collaboration album.

Although home now, the break won't be long, as they plan to enter the studio later this year to record their third full length. I suppose I was quite lucky then to catch a night with the band, albeit two of them as the other half, Steve Snere and Chris Common, were already running around busy. Besides the opportune time, this was my very first interview ever — and with one of my favorite bands no less; I don't know how often that happens for aspiring journalists.

Here is the inside story on their recent tours, the aforementioned exclusive information on the cover song, their opinion of today's local music scene, and perhaps a confession to hallucinogenic influence to their music?

Tell me about your European Tour this past summer
Ryan: We were originally supposed to do five and half weeks in Europe, and then we were offered a Mastodon tour here in the US. We flew back to Europe for festivals we were invited to play over there. We were only invited to play one here, Block Party.

What would you say was the best part of the tour?
Ryan: We went to Scandinavia, which I had never been to before. It blew my mind. No complaints.
Brian: Yeah, and the Czech Republic was great, we played a festival there. It was half straight-edge bands and half anarchist bands. We were kind of out of place there. It was actually a really good show.

And the fans weren't like, "Who the fuck are these guys?"
R: That's what we thought was going to happen, the crowd was at about 3,000. And it was outdoors. But it went over really well.

I read about how on the US tour this summer, you were having trouble with your van, and band members were getting sick. Was there ever any similar trouble during the European tours where you thought, 'Oh no, we're in a foreign country and it's all going to hell'?
R: No it's usually pretty cushy over there. We rent our backlines, so we don't have to worry about our equipment breaking. We have a driver/tour manager, they have 2007 Sprinters, so we didn't have to worry about that breaking down, or driving.

So it sounds like a European tour is much better than an U.S. tour, they treat you a lot better.
R: In a lot of ways; they're two different beasts.
B: Yeah, it's more comfortable for us, but ya know…

…You are on the other side of the world…
B: Exactly.
R: Plus, I only speak English, so it kind of sucks going to other people's countries and not being able to speak to them. And then THEY apologize for having bad English and I'm thinking, 'Why are you apologizing!? I'm in your country.'

You had mentioned in a previous interview feeling as though the Seattle music scene is in a slump.
It doesn't seem like there's many bigger bands coming out right now. It seems there aren't too many interesting younger bands. We're trying to figure out some all ages shows in the area; but who do we ask? We could ask our friends who we've played with a thousand times, or we ask, you know, these younger bands who sound like My Chemical Romance or Aiden, you know..

…wannabes
B: Yeah. There are a handful of smaller independent experimental and noisy bands that are pretty out there. But it just seems the music community is aging, and there's no one to replace them.

That's the next thing I was going to ask–It seems the Seattle music "generation" you guys came from is sort of imploding. Pretty Girls Makes Graves and the Divorce just broke up…
R: And now the Blood Brothers.

Yeah, and now there's a rumor the Blood Brothers days are numbered.
R: But those people will stay active, I'm assuming. They're all pretty determined.
B: I believe they all have new bands now, actually. All the Blood Brothers members are in new bands.

You sort of feel like this is just the new phase for them then? This isn't such a bad thing?
R: This is the background they come from, this is all they know. Same with us, if we were to break up, it would be the same thing. We'd all definitely find new things. I really want to concentrate on [music].
B: When we get that far into our career, I hope we're still doing something interesting, not doing anything stagnant. I don't care if we're touring once every five years, as long as it's whatever is healthy and interesting for the band.

I heard you're going into the studio later this year. How is the writing coming along, musically and lyrically, as opposed to your prior releases?
R: Well, we know what we don't want to do, which is just replicating what we've already done. We're just going to keep pushing ourselves and making it interesting for ourselves. We feel like we've done a good job of shying away from making the same album over and over so far. We've only just started writing, however; it's kind of hard to just jump into it. It's a long process to figure out what exactly sounds good and put all the parts together.
B: Steve had a good idea on Oxeneers in regards to what he wanted to do lyric-wise, but for the most part we don't really go into the writing process with a theme in mind. Once the CD starts to be recorded, we start to notice patterns of recurring ideas and draw rationalizations about what the album is about from there.

Tell me about the split CD with Pelican.
R: It's actually going to be a 7". They redid one of their songs, and then they sent us all of their files for us to add our own parts to it. Then we're going to redo one of our songs, and send it over to them for new parts to be added.

You did that on stage with them, for the European tour, correct? Joining each other on stage.
R: I only did it once, but he went up there a couple times with them in London.

How were they to tour with? I just caught their show last week, and they seem like crazy guys to hang around.
R: It's nice because they're mellow, but they still want to go out and have fun. We're all in the same age group, so it's not like we're touring with a bunch of kids who don't really have any concept of life. B: We have a similar background, which makes it nice.

What is the deal with the Nirvana cover album you did a song for? Both: How did you know about that?!

Erm..sorry, I'm using my insider knowledge…
Both: Haha, insider information. Yeah, we hadn't really made it public yet.
B: We did a cover off of In Utero, "Heart Shaped Box."

Oh really?! How awesome, that is my favorite Nirvana song!
R: It was for the record label Robotic Empire, they're doing a cover album of In Utero with different bands. We provided sort of our interpretation of the song.

What was your decision to be on the album, is Nirvana a band you admire?
B: Oh yeah, they are definitely a band we all like. It was a bit tricky, we all came in with different ideas of what we wanted to do. Some of them really didn't work.
R: We chose three different
songs we all wanted to do, we argued and deliberated which one we wanted to do.

How is Steve's Kurt Cobain?
R: Nah, he really didn't try that, it would just be pointless. He did a really awesome job singing for it his own way.

I guess that is how covers should be, putting your own spin on it. Which other bands are on the album?
B: Broken Social Scene, Young Widows, Daughters,… Baroness or Priestess?

Do you know when it will be released?
B: We were only the third band to confirm being on it, so I don't think for awhile. There haven't been any formal announcements on it yet.

Last Thursday's show, Steve was thrown into the keyboard, knocking the microphone into your nose…
B: Yeah, it's still sore.

I've seen you at Neumo's before, Steve jumping off the ladder, running around crazy. What's the worst time he's ever gotten hurt?
R: We think he broke a couple of ribs in Portugal.
B: He was thrown into a monitor, and was in pain for quite a while. The monitors are angled like this [shows me with the napkin dispenser a 45degree angle of the monitor]. He just sort of crawled off stage into the back. You could feel the ribs weren't really lined up right, especially compared to the other side. He couldn't take any deep breaths for awhile afterwards.

Has there ever been a point in a show where you're just like, "Ok, this is enough, it's getting way too crazy"?
R: Paris was like that.
B: Every once in awhile there's shows where people need to back up. We got shut down after only four songs in Paris. [At this point their very way too nice PR Joan joined us. This was the first time she had met them too.]

How long have you been working for them as publicist?
Joan: Uh, only about a month and a half, joining my buddy David.

What got you interested in taking up the job as publicist for them?
J: I'm amped Dave was working with them already, and I'm amped I get to work with them. [Then we all cheered to the future of Joan's career as their publicist.]

Well, I uh, don't have any more questions…except for one more: I was going to ask you guys about mushrooms. I hear rumors…especially about the song "Corporeal," that it was recorded while on mushrooms, and that Chris ate mushrooms with [an anonymous tipper] before a show. Is there some truth to these statements?
B:…possibly.
R: We…dabble in psychedelics. Allegedly. I won't confirm or deny.
B: I think we'll leave it at that, with a little mystery. I'll talk plenty about getting stoned and drinking a bunch.
[Then two seconds later Brian shares:]
B: I ate some mushrooms at Wilco last night. [Oh, busted!!]

After this, the discussion turned to Wilco, Ryan's lack of excuse for the drunken show at the Can-Can and Steve dancing like a burlesque dancer, the awesomeness that is Pelican and their stoner crowd, the Vera Project, and the delicious food at Redwood, just in time for Arthur & Yu to play on the jukebox. The busyness hadn't skipped this half of the band either — Brian said he had an early morning flight the next day. Oh, and they thanked me for not asking them what their band name means, as every other journalist makes it a point to include; also for not mentioning Botch.