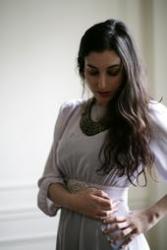 While the rest of Seattle's music lovers were milling about the Seattle center in what I can only imagine to be Bumbershoot induced ecstasy, I was at Ballard's Sunset Tavern along with a modest crowd of other Marissa Nadler enthusiasts. Nadler plays hypnotic gothic American folk and her exquisitely haunting voice is perfectly suited to aid her in her quest to resurrect the folk ballad. Her songs are rooted in the folk tradition yet drenched in effects and absolutely otherworldly, so I was curious to see how an otherworldly song would sound when the artist was playing it ten feet away from me.

When she took the small stage at the Sunset, plugged in her guitar, and launched into "Diamond Heart" after almost no tinkering of electronics, I was pleased to hear that her voice was just as incredible live as it is on record. The steady rhythm of her finger picking and amazing voice combined to create the same hypnotizing effect that her records produce. However, her stage presence was not at all what I expected, and as a result, it totally changed my experience as a listener.

Marissa Nadler looked exactly like the dark princess of freak-folk should look like (I guess that would make Joanna Newsom the freak-folk fairy queen of light or something like that): flowing white dress with lots of little frills on it, long black hair, bright red lips, and a pale, pretty face. But that's where my expectations stopped being realized. From the moment she came on stage, I got the impression that she couldn't have been less comfortable playing in front of people, even such a small crowd. She dreamily asked the crowd how we were doing three times within the first ten minutes of her set and stared off into the distance while she played, as if she was embarrassed to be the one on stage.

After coming back on stage for an encore she declared, "this is the last song I'm going to play." After finishing that song, she then said "oh wait, I promised those guys in front that I'd play "Daisy & Violet," she then paused nervously for a moment, said, "no I can't, it has the same picking pattern as the last song! I'll play it for you guys in the dressing room," Nadler then stared at her feet for a little while, pursed her lips, and decided to play it for the entire crowd, but only because she could use her effects pedals. I may have misheard this, but when she acknowledged the fact that Jesse Sykes was in attendance she mentioned how she was “like totally into Jesse Sykes’ songs.” I couldn’t really have expected her to ride out of the mists astride a glowing unicorn or anything, but it did come as sort of a shock that this twenty-six-year-old darling of the freak-folk underground says “totally” and probably wouldn’t be all that different from other people I know if I was to hang out with her.

Watching her nervousness and weird inner turmoil I couldn't help but empathize with her. It was absolutely bizarre to experience her stage presence coupled with the alien, otherworldly tone of her music. The result was that the portion of her songs which describe, or are from the point of view of fictitious people in lands far away lost much of their power. The spell was broken. But the power of the songs that are based in the here and now with autobiographical undertones were greatly magnified. When she cooed and sighed her way through her cover of Leonard Cohen's “Famous Blue Raincoat” my heart nearly stopped and “Rachel” live was also amazing.

She will be returning to Seattle September 20th to open for the Clientele and Peter Bjorn & John at the Showbox so I guess I'll have to see how she deals with being the opening act at a club where people typically chatter their way through the opening act, no matter how incredible it might be. I suggest you see what happens too, judging by the show at the Sunset, she just might melt into an adorably distraught puddle and take you with her.