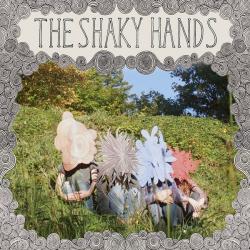 Ever heard of Holocene Music? Don't feel bad if you haven't — there are only three artists on the label, according to their website. However, if due justice is given, you just might hear a lot of HCM soon, because of one of those bands, The Shaky Hands. Hailing from Portland, Oregon, The Shaky Hands tread a path all their own, while retaining the emotional intelligence and unique aural explorations that have come to define PDX music. Their full-length, self-titled debut is a great first impression for the band, and very well might give their modest label something to keep them busy for a while.

Speaking of first impressions, the record begins with a peculiar intro which is probably best treated with amused disregard. In the opening track, "Whales Sing," the first sound that meets your eardrums upon pressing play is a thirty-second instrumental medley of "whale noises" which sounds far more like a primitive tribe worshipping the God of the Squeaky Door Hinge. It sets a surreal, almost ominous mood, which is quickly overtaken by a pleasantly catchy bassline and metronomic snare/tambourine rhythm — quite a welcome transition (I mean, who wants to hear a discomfiting song called "Whales Sing" anyway?). Then the song takes off like a well-oiled machine, with a soft blanket of organs underneath and quick flurries of guitar above. After another thirty seconds or so (just long enough to give a relaxed, no-hurry vibe), Nick Delffs drops in with his fluttering vocals, which immediately exude a feeling both naive and wise, young-blooded and old-souled. He has the type of charismatic, identifiable voice that doesn't always need to hit the right note to strike a chord in the listener.

At 3:53, "Whales Sing" is the longest track on the record by a considerable margin, mostly on account of the minute-long lead-in. The thirteen songs average about three minutes each, and though they tend to feel a little short, they don't seem any bit less full and complete than songs nearly twice their size. The record flips between electric and acoustic guitar, each of which have their distinct and innovative qualities. Their electric numbers are gleeful indie-pop headboppers, from "The Sleepless," with its muted staccato verses and puissant legato choruses to "Host Your Day," which dances the line between energetic indie and abated punk. In the acoustic realm, "Summer's Life" bounces among hand claps and harmonicas, while "Another World Parts 1 and 2" drift along side by side with strikingly mystical beauty.

Much of the record marvels in childish wonder and the giddiness of innocent love, as perceived through the romanticized lens of adult hindsight. It's a wonderful exploration through sugar-coated memories, each song a morsel in its own right. In some parts the lyrics go deep enough to reach a slightly bitter or sour center, though they never lose their virtue. The Shaky Hands have dug through their minds and have come up with something simple, universal, and cozy.