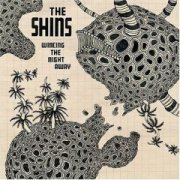 Wincing the Night Away

Hype is a vengeful mistress, seducing you only to suck you dry when you're finally feeling some amount of security. The opening weeks of 2007 have been a veritable feast for the Hype Harpies, where in rapid succession of three weeks we've seen the follow-up albums for no less than three breakthrough indie bands: Clap Your Hands Say Yeah, Bloc Party, and of course, The Shins. Can they live up to the expectations? Can they survive the media buzz? In short, will we give a shit about them anymore? Well, my friends, I've got good news and I've got bad news. The good news: none of our protagonists tanked (lest I remind you of the fate of early nineties wunderkinds like Jesus Jones or EMF… um, who?), yet none hit the nail they did on their success-bringers. So, we begin our tour of the prodigal sons of indie….

The week of January 23rd: The Shins – Wincing the Night Away.

Raise your hands if you thought the Shins would come within 20,000 discs of debuting at NUMBER ONE IN THE USA. Yes, these are your Shins who are no longer your Shins; they're the country's Shins. Blame Natalie Portman. Blame Garden State. Blame the 9/11 Commission. Beats me who to blame, but Wincing the Night Away is rapidly heading towards being the biggest selling record in Sub Pop history (behind Nirvana's Bleach and the Postal Service's Give Up). Deal with it. The Shins are huge, like R.E.M. in its heyday huge, and Wincing the Night Away is this generation's Out of Time.

That being said, why do I feel so unsatisfied by the new Shins album? Why is it that many people I know who loved the previous Shins album say it, well, sucks? Alright, it really doesn't suck, but there's just something missing on Wincing the Night Away or, in particular, there's just too much something there. Just like when They Might Be Giants made the leap from a quirky lo-fi duo to a full-blown full band on John Henry, its obvious that the Shins have taken to a full production sound with a gusto. This is not entirely bad, but somehow you turn that quirky little band into any other band out there. They still have that dreamy, ethereal mood that the Shins have made their own; just listening to the opening minute of "A Comet Appears" confirms that, with birds chirping and guitars drifting.

Wincing the Night Away somehow feels more somber than previous releases. Songs like "Girl Sailor" and "Split Needles," although catchy on the surface, have an underlying melancholy that is different than what we're used to from songs like "Caring is Creepy." The moodiness is much more straightforward, much more apparent than previous Shins' works. You keep on expecting the album to pick up its pace, but instead it just sinks deeper with tracks like "Black Wave," which on one hand are darkly beautiful, but on the other hand are, well, dark as hell. Even the really peculiar-sounding songs like "Red Rabbits" are much more subdued.

They do seem to hit the right balance on "Sea Legs," with a stronger beat and cute flute loops that build towards the guitar-rich chorus. It seems to indicate a more mature Shins-sound, almost U2-like in its scale (yeah, okay, it might be odd to ever compare the Shins with U2, sorry). Maybe it's something about the fuller sound that the Shins employ on Wincing the Night Away that has altered the mood. Just look at "Phantom Limb" — it has all the pieces of previous Shins songs there, but lacks the carefree mood. The closest we get to that is "Australia," possibly the most fun and light-hearted song on the album, with jangling guitars and jaunty vocals racing back and forth throughout the song. This, by itself, makes you feel like the Shins we knew are still there, but somehow, maybe stardom has got them down.

Wincing the Night Away isn't a bad album, it just isn't what you might have expected from the Shins, considering their last two releases. Therein lies the paradox for indie rock stars like the Shins: people alternately want more of what they like, but don't want you to stay in a rut. The Shins seem to be keenly aware of this, but they don't seem to have the compromise down just yet. Wincing the Night Away shows that the Shins want more from their music, and hopefully their new fans will stick around to find out where they goes with it.

Of course, things could be much worse, just look at what happened a week later.