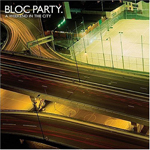 A Weekend in the City

It may be a life pressure we as normal people will never understand, but I wonder what it's like being a pop (in the good sense) band in the U.K.? I would imagine you would live in a world where you measure yourself against Coldplay, the seemingly bottomless hit machine that churns out anthem after anthem like U2 during its prime. What's a band that might not be as anthemic as Chris Martin and the boys to do?

Now imagine if said band were undeniably hook-prone — but not in the same lighter-waving majesty of "Clocks" or "The Scientist" — but more as a post-punk flag-bearer. The attrition rate for such bands is high, no matter how well-loved the debut might be (just ask Franz Ferdinand), and trying to grasp that brass ring just might lead you even further astray. This is where we run into Bloc Party. Their debut, Silent Alarm pretty much played like a disc full of singles, which may have been a curse as well as a blessing. On A Weekend in the City, Kele and the boys sound like they're trying to recreate the un-recreatable, and it works to much more variable results this time around.

The record starts off on a high note when Kele warbles like he has never before in the slow and sensual opening "Song for Clay (Disappear Here)," before it dives straight into a bombastic guitar and drum attack that is classic Bloc Party. Hearing Kele practically sneer out the lyrics, "East London is vampire/it sucks the joy right out of me" when juxtaposed by his intro to the song, show off the dynamism of the band. They keep it going into "Hunting for Witches," something like a more electrified brother of "Price of Gas," but still as captivating in its post-punk Duran Duran vibe.

If you want to hear the absolute apex of the album, and possibly of anything Bloc Party has ever recorded, look no further than "The Prayer." What can be written to capture a song like this that gets stuck in your head after hearing merely a 30 second garbled snippet on a BBC video feed? It not only captures the gritty Gang of Four feel of "Helicopter" or "Banquet" right from its thunderous opening drums and deep-seated humming, but it also adds an element of post-rave nihilism with Kele asking, "Is it so wrong to crave recognition?" Bloc Party has created a song that builds and relieves tensions like a novel, captivating the listener no matter how many times you've heard the song.

Bloc Party does have a gift crafting songs that can feel both sensitive and thundering. "Waiting for the 7.18" is a straight-up rock song with rushing guitars that mix perfectly with the delicate chimes and Kele's surprisingly tender lyrics like, "If I could do it again, I'd climb more trees/I'd pick and I'd eat more wild blackberries" — maybe not what you would expect from such a band. However, they can take it a little too far into Coldplay territory, with power ballad tracks such as "I Still Remember". It never sounds like a Bloc party song. Sure, it's sweet and romantic and the radio listeners will eat it up, but it just feels like a blatant attempt to write a pop hit (and comes out soulless). The same might be said for "Kreuzburg" and "SXRT," both nice enough songs, but a little too U2 for their own good. They should be playing songs like "On" and "Where is Home?" which can exist both as emotional journeys and have identities of their own (but what's with Kele's obsession with vampires these days?)

A Weekend in the City doesn't fully capture the same energy of Bloc Party's debut — it's more subdued and nuanced. They might not be able to make every song as infectious as they pulled off on Silent Alarm, but the release shows a maturity for the band that came with all the growing pains you might expect. That being said, when A Weekend in the City hits its stride, you realize that Bloc Party might be writing some of the most memorable pop songs out there today.