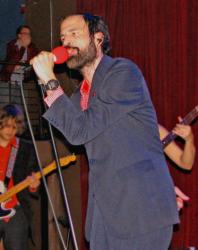 I saw the Silver Jews at the Showbox at the Market last year, completely sold out and packed to the brim. I was completely ecstatic about seeing them, it being their first time in Seattle and their first tour in support of an album ever. I went to the expectedly overcrowded show because I had to. I had to see the Jews. I had to hear David Berman's darkly husky voice and experience his poetry first hand, from the mouth of the poet. Their second go-round, last night at Neumos, gave me the chance to see them in a more intimate setting and in support of their newest album, Lookout Mountain, Lookout Sea.

Kicking off the show with an introductory admission, he shouted "You have no reason to trust us but we will rock!". Speaking through the lyrics rather than full-on singing he operated a no-bullshit delivery, quipping "romance is the douche of the bourgeoisie" in the Allman Brothers inspired guitar jam of "San Fransisco B.C". David Berman is a lyrical artist, his words nestled deep inside the full drawl of the southeast contiguous. Neumo's was sweltering, packed with the sweat-slick and shaggy-haired lifting their beers up to the Silver Jews, seconding the gospel of Berman's words.

The single most striking aspect of Berman's music is how damn quotable every single line of his songs are. They are deep, true, and steeped in the American landscape. His raspy baritone was the perfect wrangler to the loose lo-fi ramble of the music, singing of traveling from Odessa to Houston and everywhere in-between. Even oldie but goodies "Smith and Jones Forever" and "Random Rules" from acclaimed American Water (Stephen Malkmus joined the Jews as sometime member on this album) were represented, eliciting the most applause from the crowd.

A somewhat reluctant-seeming and uncomfortable performer, Berman had shining moments onstage.  While singing and whipping his red foam microphone around theatrically he drew shapes of states on a pad of paper on an easel, illustrating his musical point. I kept wondering why he wasn't playing guitar as well as singing, per his norm, and after briefly speaking with his wife Cassie, Silver Jews bass player and secondary vocalist, I found out that while in Ireland Berman fractured his thumb while catching himself mid-fall. Cassie said that the injury had produced somewhat of a new dynamic in their performances that she was enjoying experiencing. They played the encore before even exiting the stage at all, which was refreshing, and during the second encore song, "Lookout Mountain, Lookout Sea", Berman finally brought out the guitar for one raucous bout.

Berman is an enigmatic presence onstage, lurking like a mysterious sideshow stagecharmer, his voice emitting the solemn ring of a modern day Johnny Cash.  The music of the Silver Jews is a sanctuary for the common man, scrubbed raw and as real as music can get. Seeing these songs performed right in front of you brings them to life, giving them credibility through the embellishment and becoming more believable and important as they tumble out of his mouth. This is a man that's been through some shit and you can hear it in the very essence of the Silver Jews.

A Silver Jews show is never the best show I've ever seen, but that's not why I go see them. I go because I've become trapped in the brusk irony and ramshackle delivery of songs that read more like literature and less like rock 'n roll. I go because you know he's a recovering addict, and his work after the drug use is just as good, if not better. The Silver Jews are an icon of indie rock… they stand on their own amidst the Pavement relation, and they bring something else to the table: pure battered heart and a recovering soul.