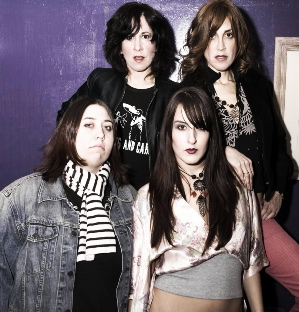 The Song Remains the Same: the abundance of Led Zeppelin tribute bands

One of the few April Fool's jokes from last week that was actually pretty funny was the one with Bjork becoming the new lead singer of Led Zeppelin. And only playing songs from the I and IV albums.

Still, though, this got me thinking as I was looking at the upcoming show calendar that a) boomer nostalgia could be recession proof and b) there are a shit-ton (or if you're a Wonkette reader, a children's treasury) of Led Zeppelin cover bands coming through town this spring.

First is this Thursday night with an all-female group called Zepparella at the Tractor. I guess I shouldn't call them a "cover band" because their MySpace page says, "Zepparella is not a tribute band. No wigs, no backing tracks. It is a celebration of some of the greatest music ever written, by women who love it as musicians and as fans."

Exactly one week later (on Thursday, April 16), Neumo's has another all-girl Led Zep cover band, with the probably more well-known Lez Zeppelin. Chuck Klosterman wrote of them at a party for the show "The L Word" in a profile (that also discussed Zepparella):

Lez Zeppelin played the Bonnaroo festival last year and confused enough media outlets that they were the real deal.

A band that is the exact opposite of Zepparella and Lez Zeppelin (in that they're all dudes) is Led Zepagain, whose website boasts an endorsement from Led Zep's Jimmy Page. They will be at the Showbox at the Market on Friday, May 29.

The abundance of Led Zeppelin cover bands in this economy may have scared off another one from forming (or so was the rumor on the internets), this one was with Alter Bridge singer Myles Kennedy playing the part of Robert Plant and the parts of Jimmy Page, John Paul Jones and John Bonham being played by Jimmy Page, John Paul Jones and Jason Bonham.