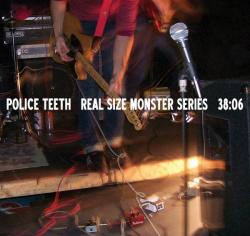 Police Teeth follow up their taut-song form-lengthy EP Jazz Records For Sale with a diverse debut album Super Big Gulp spiked with more brittle thoughts, bitter emotions, and barroom threats than tracks like "Motherfuckers Move Slow" and "Taking A Shit On Company Time" promised. Believe it or leave it. Conrad Uno recorded this album for the Bellingham-bred band in July 2008, but the lyrics sound like they were written this afternoon after watching crap news.

Formed from the basement-fermented ashes of Racetrack and USS Horsewhip, Police Teeth are not the roguishly handsome, dynamic, classic punk loving band their name might confuse some with, though they are contemporaries of theirs. Police Teeth are exactly what they sound like — new songs making a parallel between music scene struggles and the mundane life in "Bob Stinson Will Have His Revenge On Ferndale" (not particularly about The Replacements) are the gritted, next-stop-violence half-smile to having to piss in the jar for the boss just when you get the here-it-comes news about "no raise!" This is post-working class punk right on the verge of smashing the shit out of the cubicle and heading down to the way too full welfare office. The guy who ended up doing construction work at the end of "Office Space"? He would raise a broken beer bottle to these smiling guys at the end of their spin-off-the-edge, stage-chomping past midnight set just as they "set their equipment on fire." Not for some rock spectacle but just because "fire = pretty." (Kind of like the lighter backing vocals on track five, adding a less caustic glow to the gut punch-rock throughout.)

Police Teeth are James Burns (rants, croons, guitars, keys, etc.), Adam Grunke (more guitars, glockenspiel, etc.), Richard Boyer (drums, guitars), Christopher Rasmussen (vocals, bass), and they have sort of a team spirit feel all together, which is good, because songs like "Big Hearts, Small Riffs" and "There's A Big Heap Of Trash At The End Of The Rainbow" have enough spittle-swapped alienation to imply the band brothers could shred each other with box cutters in the tour van.

Real Size Monster Series has an anxious freedom at the edge of every song; where "SLC Punks" once secretly dreamed/fetishized of selling out and maybe making a difference at the same time, Police Teeth are careful creators of aggressive, fun music in a time when one is hardly able to either sell out or likely allowed to make much of a difference in the media-fed face of doom.