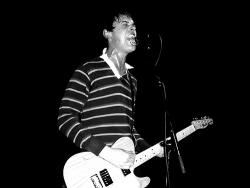 After a bit of personal chaos, and catching Visqueen at the Showbox (they were amazing!), I got to Neumo's just in time to catch one of my favorite bands ever, the Thermals for the CD release of their fourth album, Now We Can See.

They put on an unbelievably tight set, more so than I've ever seen before (in my opinion, thanks in part to their amazing new drummer, Westin Glass). The set pulled strongly from their newest release, but they managed to sneak in lots of fan favorites like "It's Trivia" and "No Culture Icons" (the latter will always have me screaming "can't fucking stop thinking about you!" while jumping wildly). As I said here, they're a tighter and stronger band ready to take on the world, and it seems the audience agreed.

In recent Thermals shows, I'd noticed how old I was starting to feel, and how much I'd grown up with the band (I was 16 when I first saw them, and now I'm 22). This time, the audience still held it's young stronghold, but the crowd seemed much older. I'd just assumed they were parents, taking their kids to go rock out (something my mother did quite often). Normally, I'm used to hiding off to the side a bit at Thermals shows (especially ones at Neumo's, due to the flat across the front stage and the "nowhere to hide" box layout of the main floor) for fear of being crushed by their super exuberant young fans (last time I had bruises for days), but this time, the only time I was elbowed was by an over excited parent jumping up and down and singing along. Despite their overuse of the f word (like the album called Fuckin' A), it seems as if the Thermals are now parent approved. Will that make them uncool to kids? Or will be start seeing parents sing along, even to the bad words? Either way, all parties involved are certainly in for a damn good show.