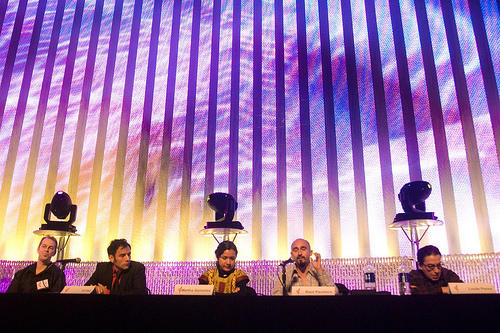 Your Pop Conference calendar for this weekend

I have been looking forward to the Pop Conference since they starting leaking panelists and session titles — who wouldn't be intrigued by a talk titled "Reconsidering the Groupie" (although I like to call them/us "Superfans") with John Roderick? I know that imaginary victoria and I are hoping to be front row and center at that one.

And with Mike McGonigal, Franklin Bruno, Sean Nelson and Tim Quirk all in one building? I can hardly imagine being around that much brain power.

Here's what I've narrowed down my dance card to be. I am going to aim to get into these (yay pre-registration). What are you all going to see? Pipe up and report back!

Head over to the EMP site to put together your Pop Conference schedule.

1:30 – 3:00
>> Relocating Desire
Moderated by: Tim Quirk
Featuring:
Sean Nelson, "Let’s (Not) Get it On– Or, “Fucking to Songs About Fucking and Other Uncomfortable Developments in the Awkward Relationship Between What We’re Going to Have to Just Agree to Call Indie Rock and Sexuality in the 1990s.”"
Ann Powers, "On Gushing: Relocating Desire in Pop Criticism"
Seth L. Sanders, "Fanatical Doubt"

3:15 – 4:45
>> Reconsidering the Groupie
This roundtable will talk about the gender issues that surround groupies, the groupie transaction, groupie-ism as discourse, and how groupies function in new technology-driven social networks.
Moderated by: Mikki Halpin
Featuring:
John Roderick
Margaret Moser
Jodi O'Brien