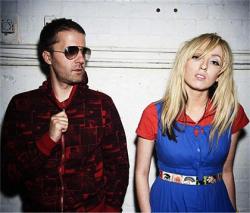 The Ting Tings at the Crocodile

About two weeks ago there was a conversation on Twitter with some of the music-related people I follow about bands that we remembered before they blew up, playing to nearly empty rooms. One person remembered seeing Jimmy Eat World play to a handful of people. The band like that for me is The Ting Tings. I had written a blog post about them in February of last year, previewing their first Seattle show. It was at the Vera Project and there couldn’t have been any more than 30 people there.

I had just heard their first singles (“That’s Not My Name” and “Great DJ”), which I found via the Hype Machine and played the hell out of them, convinced that they would be huge if enough people heard “That’s Not My Name”, wondering if that was how the first writers at the NME felt when they first got their hands on The Modern Age EP.

Fast forward about two months from there and another single from The Ting Tings, “Shut Up and Let Me Go” was picked up in an iPod commercial and they’ve taken off since then. When I reviewed their debut album, We Started Nothing, I thought it was 40% great (the three singles I mentioned and “Fruit Machine”) but contained a lot of filler. Maybe I didn’t spend enough time with “Impacilla Carpisung” because the album seems stronger and more consistent when I’ve listened to it more recently. Still, those four songs have been on repeat on my iPod.

There are some imperfections on the singles, like how “That’s Not My Name” goes on for two long and would be perfect if they stopped before getting to the bridge, although that didn’t bother me enough to keep it from getting one of my Pazz and Jop votes last year. Live, though, the band is pretty fantastic because they can exploit every hook on We Started Nothing. Easter Sunday night’s show at the Crocodile was pretty remarkable in that regard.

This show was one of the first to be announced at the renovated Croc and sold out almost immediately during pre-sale. When I took a tour of the location two days before its grand opening and interviewed the Croc’s booker, Eli Anderson, he told me that most of the tickets sold for this show were fan club presale – so that meant that almost the entire crowd was made up of devoted Ting Tings fans (and members of Franz Ferdinand).

The set lasted about an hour and the band covered every song from We Started Nothing but little else. Somewhere in the set, Katie White said that she wanted to get everyone to dance – and the Ting Tings fans were happy to oblige. She also remarked how this was the band’s third trip to Seattle, with their first being “in an art space with like 14 people”, which was the Vera show I mentioned above, although I think the attendance, while still small, exceeded 14 heads – although not by much. The crowd sang along with every song and applauded after only a few notes, once they recognized the song and realized it was a favorite.

After the band left the stage, just before the encore, the applause was a little subdued. I think the audience was content but also expecting the encore, as though they wouldn’t play “That’s Not My Name”. Before they played any of their own songs for the encore, though, multi-instrumentalist Jules De Martino came out first and said “let’s play some tunes” before pressing a button on his keyboard to sample the groove from “Walk this Way” (and then “Another One Bites the Dust and then “Ghostbusters”).

The Ting Tings set didn’t seem like an hour, because it was so enjoyable the time seemed to go by so quickly. Upon leaving the Crocodile, everyone seemed content and even thrilled with the show they had just seen.