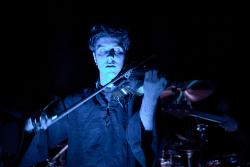 Estradasphere, Jason Webley, Amanda Palmer, and "The Twins" make an appearance at last

Jason Webley opened tonight's show with his usual eccentric folk splendor with a mimed pear offering to a girl in the audience. After Webley sang about the “Pestilence and Rot,” the audience joined in the performance by encouraging the pear-biter to engage in a gagging death scene for the amusement of all. One of the main reasons I always enjoy Webley's performances is that he inspires audience participation more than any other artist, and tonight was no exception: he tickled strangers with vocalized violas and trombones. When he spoke to the trombones about their lame energy, Jason asked them not to "…worry about things like rhythm…focus on your strengths, like loudness and obnoxiousness."

Afterwards, the host band Estradasphere took to the stage. The band moved into town about six months ago from California and, after announcing this, made the requisite snarks themselves. I've heard Estradasphere before in Portland, and my impression remains the same: these guys would make a kick-ass soundtrack to rival any of Tarentino's. From 40's big band to surf rock to a Mario Bros. Underwater/Zelda suite, the band's diverse sound left a shell-shocked audience in their wake. After Amanda Palmer (of the Dresden Dolls) made a guest appearance and sang about a soldier's wife while the band backed her, she then covered Madonna and scurried offstage. To finish of the night, Estradasphere had two surprises: a funk version of "The Rainbow Connection" (Kermit never sounded so sexy) and a barbershop version of a spiritual/funeral ode.

The evening’s theatrics didn’t stop there. A highpoint of the evening was Evelyn, which was Evelyn's first (and perhaps only?) live appearance. The story goes that Evelyn, a pair of conjoined twins, were “discovered” by Jason Webley and Amanda Palmer and coerced into making a limited-edition vinyl (Evelyn suspiciously sounds like a male folk and female cabaret punk singer tag-team). To confound this tale, the conjoined sisters showed up on Estradasphere's balcony in a lovely, large dress; after awkwardly whispering for ten minutes, they very shyly played one-handed accordion to "Elephant, Elephant" and then switched to one-handed guitar for a new song about sistercide. Afterwards, there was a snack break for–what else–a Twix. It was very hard for the twins to eat with straight faces while giggles from the audience accompanied their chewing. After singing a third song about the Internet, the pair whispered again and shuffled offstage. The evening also featured the distribution of conjoined gingerbread cookies to commemorate the occasion.

Amanda Palmer came down after being separated from her twin (an eye-popping dressed-in-drag Jason Wembly), and then admitted to her fear about the upcoming vocal surgery. She sang "The Point of it All" and offered up the point that if her surgery was a travesty, we could all say "OMG. I totally heard Amanda Palmer's last song." I'm in love with the way Palmer's talent matches her ego, and later at work this week a friend at the show admitted to developing a rock crush on her after hearing her sing for the first time.

The show is cause enough for celebration. But beyond that, let’s rejoice that there's a new venue in town! Hallelujah! The 608 is Estradasphere's Ballardian home during the week, but they've got a decent-sized performance space and have decided to hold shows most weekends to help pay the rent.

Another reason I think this venue is a gem? It could be because I'm soft-hearted and want bands to succeed. And I am/do. A more honest answer might be that this place is five blocks from my house, next door to three bars, and such things should be encouraged. Capitol Hill has enough venues and not enough parking.