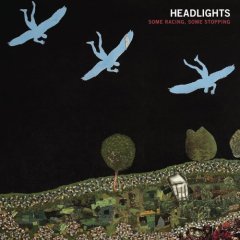 Some Racing, Some Stopping

The story of Headlights latest album goes something like this (according to their band bio): Headlights tours endlessly in support of their debut LP Kill Them With Kindness. They get burned out, swear off music for a while, and move into a farmhouse together. After a while, once the authenticity of agrarian living sets in, they gradually begin writing songs and recording the songs themselves. The songs are mixed, and thus Some Racing, Some Stopping is born.

Now while country living seems to be an ideal setting to record a breakthrough album for many bands, the rural setting seems to do little for Headlights. My first experiences with them were as a rock band. Before hearing them, my friend Drew described them as “the tightest band” he had ever seen live, and after experiencing a co-bill with them and Page France, I had to agree. Kill Them With Kindness is an album that rocks from beginning to end, and one of my favorite albums of last year.

For Some Racing, Some Stopping, the band decided to take a different approach. According to their bio, the farmhouse eliminated “the pressures of studio timeframes and a ticking hourly rate” and as such “the band was free to write and record as they saw fit.” As a result “the songs were recorded as they were written, and many of the tracks that were used were first takes.” Herein lies one of the major flaws of the album – its immediacy. While it is true that the songs sound fresh – they may be a little too fresh, as in the band didn’t take a week or so in the writing process to flush everything out. Opening track “Get Your Head Around It” spends most of the song revving up its engines. It has a good start, but just when you are thinking that you will get to the meat of the song (maybe, let’s say, a chorus), the song is over. Similar false starts can be found on “School Boys,” “So Much for the Afternoon,” and “Towers,” each of which take their time getting to the best part of the song (and let me emphasize that these parts are really quite good) — only to give that part the shortest straw. It seems that if these songs were given a little bit more of a full treatment, the ideas contained therein could be transformed into truly great pop songs.

That is not to say that there aren’t some pop gems on Some Racing, Some Stopping. First single “Cherry Tulips,” which is a throwback to the fifties sonically, is a pleasant curveball that grows on you with repeated listens. Other songs “Market Girl,” “Catch Them All,” and “April 2” are all well thought out songs that recall the sonic power of Kindness while at the same time infusing new instrumental elements (namely acoustic guitars and strings).

In the end, Some Racing, Some Stopping lives up to its title a little too well. There are moments when the band is in their finest form, creating songs that are so catchy that they race through your head for the next few days. However, just when you think you’ve hit a place where the album is really going to take off, there are other songs that just seem to sink in the water.

But then again, it's probably just an effect of country living.