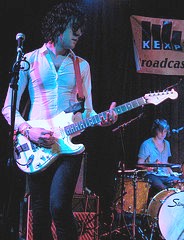 Stylish boys, these Voom Blooms. With tight, skinny pants, impressive shoes, and messy-moppy hair they could step straight into a Calvin Klein ad. And they can play! Tell me again: why aren’t they signed?

The Voom Blooms held down the middle slot on a three-band card for the KEXP John in the Morning at Night lineup on March 7th. A middle slot can be tough but they commanded the room right from the get-go — pulling folks away from the bars and onto the floor and balcony.

The foursome’s 40-minute set of jangly, enthusiastic pop-rock started fast and kept momentum throughout. Jangly guitar playing and tight beats engaged the older crowd who seemed happy enough just to have a babysitter and a night out. Enthusiastic cheers were raised after every song, even those with a rough edge.

In particular, the closing song, “By the Seashore,” was a checkerboard of beat and style. Alternating between verse and band-jam, the two segments had their own beat-per-minute (and perhaps even key signature). That approach resulted in a hard-edged transition from band-jam back to verse. Repeatedly. Attention getting, certainly. But not in a good way.

The group played mostly new tunes from their self-release EP Nine Ships, expected to be available in the states this summer. I was happy they trotted out the older “Thoughts of Rena,” although I had a mild urge to run: that song was in my iPod workout playlist for months last year! The set opener, “Anna,” was energetic also and could land the Voom Blooms back onto my workout playlist. “Lucille” and “Nine Ships” have good workout potential, too.

MTV has named the Voom Blooms a band to watch in 2008. Keep an eye on the festival lineups and catch the Bloom Vooms if you can.

Tulsa opened the birthday bash for John Richards by warming up the crowd with seriously strong vocals, smart song construction, and the perfect amount of reverb.

The 45-minute set included well-constructed selections from the 2007 release I Was Submerged (Park the Van Records) as well as two covers of country-flavored tunes. The trio’s performance on Friday meshed well and sounded full despite departure of a fourth band member and a change in drummer at the start of the year.

My one piece of advice to Tulsa (yes, I know I wasn’t asked but here it comes anyway) is to work on engaging the audience more. Between-song banter was fine, but Tanton could easily hit the sweet spot of fan loyalty if he made eye contact with the audience while performing – particularly with the crush-susceptible. Take advantage of your youthful good looks, man!