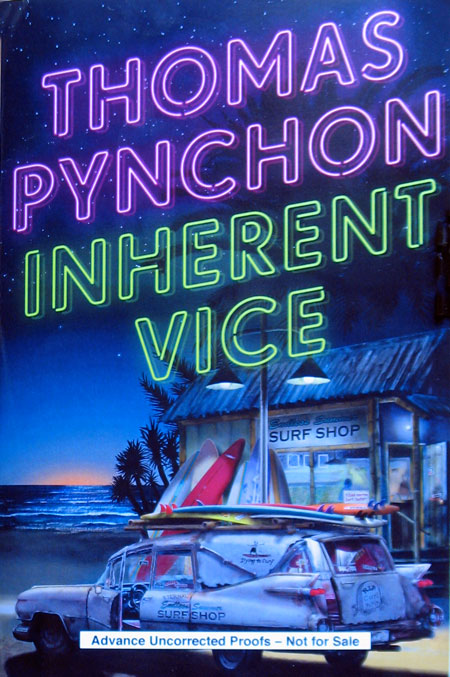 Thomas Pynchon, the celebrated and notoriously reclusive 72-year old author of such books as Mason & Dixon and Inherent Vice (which was just published last week), was, along with The New Yorker, the victim of a hoax by a quasi-popular indie rock band in the mid-1990s called Lotion.

The New Yorker published a “Talk of the Town” piece in 1996 called “Godzilla Meets Indie Rockers” about the band and author forming an unusual friendship that began when they met at one of the band’s shows in Cincinnati. He was described as “the older guy, who was wearing a Godzilla shirt and ill-fitting pants” and adding:

He introduced himself as Tom. Jim Ferguson was reading “Slow Learner”, Pynchon’s collection of short stories. He’d left his copy backstage in a New York rock club, where Pynchon had been invited to watch the show. Pynchon saw it and asked, “Who’s reading my book?” “I said, ‘No, that’s my book,'” Jim recalls. “It didn’t register until I got onstage.”

This story made it past The New Yorker’s fact-checkers because Pynchon isn’t exactly around to offer a denial, but the band is now admitting it was a hoax all along. They do say that they did meet Pynchon and he wrote the liner notes to one of their albums, but I’ll believe that when Mr. Pynchon comes out of hiding to confirm it. The magazine issued a clarification this week that said:

Here is the band’s current version of events: They had, in fact, met Pynchon, but they did so through his accountant, who happened to be the mother of Lotion’s drummer, Rob Youngberg. She gave Pynchon an advance copy of Lotion’s album “Nobody’s Cool,” and he liked it well enough; at any rate, he agreed to write the liner notes. (Pynchon stalkers responded—at a show in Toronto, Ferguson said, someone approached the stage “with a fucking shoebox” of manuscript pages intended for the master’s appraisal.)

Pynchon did attend some Lotion shows, they now say, but not in Cincinnati. He didn’t wear a Godzilla T-shirt. And he used a credit card like everyone else. “Tom never cultivated his reclusiveness,” Zajkowski says. “We did.” In fact, Zajkowski didn’t find the author all that elusive. “This guy was not Clark Kent.” Maybe not; or maybe Pynchon will finally emerge with his version of the story.