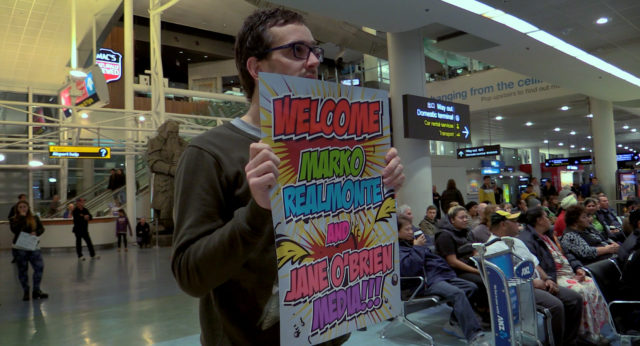 Oh dear. I wasn’t quite prepared to fall down the rabbit hole of cat-fishing craziness Tickled is. The genesis of this film started with New Zealand television journalist David Farrier investigating a story on “Competitive Endurance Tickling,” which led him to a company on Facebook called Jane O’Brien Media that produces tons of CET videos. But when David messaged Jane O’Brien with inquiries, all he got back were homophobic insults — so Farrier and his friend, Dylan Reeve, decided to investigate even further.

With each new piece of information, Farrier discovers a weird, decades-old mystery unfolding … and I feel like that’s really all I can say without ruining it. As imaginary embracey said in his SIFF review of the film, “This is a truly astonishing documentary which achieves Serial-esque levels of true-life suspense; the more clueless you are going in the better.“ For real, you guys. FOR REAL. And the end of the film isn’t even the end of the story.

One of the most confrontational subjects in the documentary, Kevin Clarke, who films CET videos for Jane O’Brien Media, has mounted a campaign to stop the lies he believes the film is spreading about him and his employer.

So I guess my question is, if that’s true, what is the audience for these videos? Are there really a people out there who watch these things to see how long the guys featured can endure tickling? Considering the Jane O’Brien Facebook page is full of shirtless dudes showing off their abs, I’m really, really skeptical about that. Also, check out those comments. I mean.

Anyway! Once you’ve seen the film, you can learn more about Clarke’s views on the, as he calls it, “liarmentary”on his web site. I’d also recommend taking a look at this video filmed during a Q&A after Tickled‘s L.A. premiere.

I basically can’t stop thinking about this, and I hope Farrier & Reeve give us an update on what’s happening with all this madness in a few months.

Side note: After writing this, I fear what Facebook ads & Google search results will now come up in my feed ..