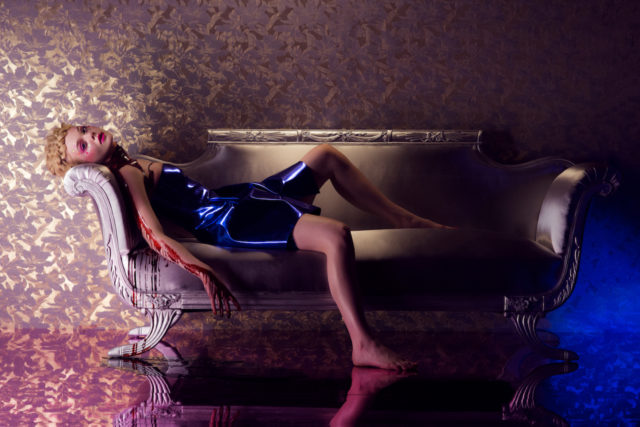 “I know how I look. What’s wrong with that?”

The film’s central character, Jesse (Elle Fanning), is a 16-year-old who’s just arrived in L.A. to make money on the only bankable skill she has, her beauty. And bankable it is. She lands a spot in a modeling agency almost immediately, including a coveted photo session with a famous photographer. Every man who sees Jesse stares at her with orgasmic rapture (except Keanu Reeve’s nasty motel manager, who dismissively refers to her as “hard candy”); every woman who sees Jesse is either fascinated with, or disgusted by her — and sometimes both.

A trio of women surround Jesse throughout the film: Gigi (Bella Heathcote), a plastic-surgery addicted model whose jealousy manifests in mean girl insults; Sarah (Abbey Lee), an insecure model who feels invisible, especially when faced with her newer, younger competition; and Ruby (Jenna Malone), a witchy makeup artist who’s obsessed with getting Jesse into her bed.

And yes, this is also a horror film, not just a literal interpretation of how Refn views L.A. model culture. Most of that horror takes place in the final 30 minutes, with the Director doing an expert job of constantly flipping the focus so you’re never really sure who’s in danger from whom until the final confrontation.

I’ve never seen someone mash-up such rich, gorgeous visuals with over-the-top satire before, and Refn does it almost effortlessly. There were only two scenes that I thought didn’t really belong; one is obviously there JUST for shock value, and the other, well it seemed like it was just there because the Director thought it would look hella cool (and it did). In the end, any problems I had with it were overcome with one deliciously nasty final scene.

There are a lot of reviews out there saying The Neon Demon is beautiful, yet shallow — to which I say: isn’t that the point? Refn is mirroring the film’s content with the industry he’s poking fun at, right?

During a pivotal scene, Allesandro Nivola’s Fashion Designer alter ego says, “Beauty isn’t everything; it’s the ONLY thing.” A dangerous philosophy to believe in … particularly if you’re in this film.

One last thing: holyshit that soundtrack. I need it on vinyl like WHOA.