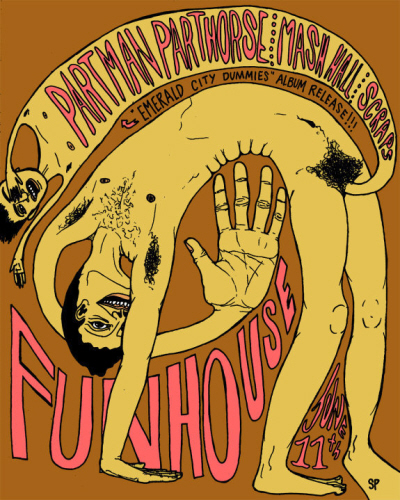 The first 15 people to buy tapes at this show will get a free split 7 inch with side A featuring Partman Parthorse- “Hardcore Fucking” and Side B, SPURM- “Making Love.” Just think you get the best of both worlds for free with Emerald City Dummies, PMPH’s new release. Kicking off the whole dang music orgy are Scraps, fellow ggnzla artists, and Mash Hall, previously They Live! Don’t be fooled by “Dollar Bin,” PMPH’s release from the new album, with such an awesome array of musical talents at their record release show, it’s pretty clear that they don’t hate all of Seattle’s music scene. And let’s say you DO hate on Seattle’s music scene, well, where else can you drink, play basketball (the finals are on), and cheer along when one of your friend’s bands get dissed on stage? Funhouse. Friday night.