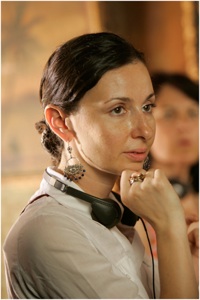 One of my favorite films at SIFF this year was the beautiful, intuitive drama Cairo Time, written and directed by the equally beautiful and intuitive Ruba Nadda.

In person, Nadda exudes an open friendliness that instantly made me comfortable. We sat down for a few minutes and discussed everything from Patricia Clarkson’s eyebrows to the fiasco of Sex and the City 2. It wouldn’t be an exaggeration to say that I was captivated by everything she said, and that I’d love to be able to sit down with her and do it again.

Ruba Nadda: It’s funny, because people ask me why I’m doing that, and it’s just the characters. I wrote the scripts as well, and the character just comes to my head, and for Cairo Time she was Patricia Clarkson. I saw her beautiful face in my head.

My first feature, Sabah, was about a 40-year-old Muslim woman who had never been in love before and had become stuck taking care of her mother, which happens to a lot of immigrant women. They get the brunt of that – and one day she falls in love with someone who’s white.

With Cairo Time, I just saw her: Juliet was in her late 40s, and I just felt, because I had gotten a lot of pressure from the financiers to make her in her 20s or 30s, and I said NO. This is a character who has a history, a marriage – a 30-year-old marriage. She has children, she’s worked, and for her to feel what she feels at that time in her marriage – you do not feel that in your 20s or your 30s, I’m sorry. You need that history.

I think to be able to see that on screen is great! It’s nice not to always see women in their 20s. And I LOVE Patricia Clarkson. So you wrote it for her?

RN: I did. The thing about the script was that it was a very simple, very subtle story, and I knew that if the roles of Juliet and Tareq were cast wrong, it could be really bad – because I knew that I wanted to capture that subtlety. And I knew that Patricia could break your heart with the flick of her eyebrow. And I don’t know how she does it! I’ve asked her, can you do that eyebrow thing that you do? And she has no clue what I’m talking about.

So she just – I just knew that she was it. I just remember when I first met her, she walked in the door and I knew she was my girl. In real life, she’s just so fantastic. And she’s got so much experience –and she’s soooo Southern. She’s so big in personality. She just became Juliet. She’s a powerhouse.

And when you cast Tareq, were you picturing Alexander Siddig?

RN: I had him in mind as well, yeah. It’s hard to find good Arab men in their 40s for some reason….

RN: Well, yeah! Honestly I needed someone hot…and tall. And his eyes are insane! They’re this green-blue…but the thing about Alexander, because I’ve been a fan of his since [Star Trek:] Deep Space Nine, and then Syriana, he’s just so – there’s something very haunting about those eyes, and there’s something very old-fashioned about him. And that’s what I was looking for, so I hounded him until he said yes.

Had you spent much time in Cairo before deciding to film there?

RN: Yes. I’m Canadian, but my parents are Arab, and so we on-and-off lived in Damascus, during my childhood, and so they would take us on visits to Cairo. And over the years it just kept changing and I had a huge fascination with it.

It’s just such a vibrant, teeming with humanity city. It’s got so much history, but there’s something in the air – I can’t explain it – that just breaks your North American guard down, and I wanted to capture that in this movie. And I was very scared, because no one had ever pulled off shooting entirely in Cairo, it’s like a nightmare, So I didn’t tell anybody how difficult it was going to be. We showed up and I was like, “Surprise!”

Yeah, in addition to the brilliant writing and the characters in this story, the city was just beautiful.

RN: Thank you. Yeah, it is beautiful. But it’s not gentle – and that’s what I loved about it.

You really did capture that, the craziness in the streets with the traffic and the people, and the men following her around.

RN: Yeah, that happens. And it’s bad. It’s not cool. And it’s not older Arab men doing that, they do not like it. It’s the young men. And it’s because 50% of the population is under the age of 25, and the sexes are so segregated. Even as an Arab woman I’m so thankful that I’ve got a Canadian passport, because I’m free. I can wear whatever I want as a woman, and I have that right. I have that independence. And it’s something that the culture doesn’t like to talk about.

You know I’ll get the odd Arab man in an audience who will say, “Hey, that’s not true”.  But it is true. I mean, I can’t walk down to the street without being followed, and I will be telling them in Arabic to leave me alone.

I got the idea for Cairo Time because my mother is blonde and green-eyed, and I remember when I was 16, we landed in Cairo and she was walking a little ahead of me at the airport, and this group of like 30 men surrounded her, thinking she was a foreigner. And my dad was like, “HELLO, she’s with me!”.

One of the things I did like about this film, though, was that though Juliet did have bare legs and arms some of the time, she was modestly dressed and she did wrap a scarf around her head when she went to visit the temples, as a sign of respect. And I’m saying that because of the contrast of this with something like Sex and the City 2.

RN: Well, here’s the thing about Sex and the City 2. You can’t take it seriously! I mean, it is cliché, but the thing people don’t realize about a lot of Arab cities, especially Cairo, is that it’s not an Islamic state. It’s very diverse. You have the conservative women, and then you have the women who are so fashionable and modern with tight jeans and stilettos.

RN: Yes, like Yasmeen. And I’ve had other comments from Arabs saying, “Why isn’t she covered?” and I say because that’s not Cairo. Cairo is a fashionable city. The thing that’s interesting now is that there are a lot of young women covering up. The fashion is a full sort of King Tut style hijab, and the eye makeup is out of this world! And everything matches. It’s just crazy.

I’ve talked to them and asked why they bother covering up, and the interesting thing that I discovered is that by looking pious, they’re allowed to leave the house and party with their girlfriends, and stay out until midnight. Because when fathers, brothers, cousins, and other males question them, they’re like, well we’re wearing hijab. And so that hijab actually equals freedom.

And are all male coffee shops like the one Tareq owned in the film common in Cairo?

RN: No. The females hang out at home – what’s known as “visits”. And mind you, so many times I would accidentally walk into a male only café, and they were cool with it. Immediately they’d get a chair, so it’s not like a misogynist thing. It’s just a social part of life.

The women actually don’t want to be there. There’s other places where men and women can be together…and I think that’s where Sex and the City 2 missed the point. You know, the point is that YES, there’s a lot of oppression of women, absolutely, but it’s not as horrible as it seems.

The thing is, there is something truly wonderful about the States and Canada  – we as women do have those rights. We have those freedoms as women which kind of lack in the Middle East, however, there’s something missing [in the portrayal of that].

Yeah, I just felt like it was a cultural and religious respect issue that they [Sex and the City 2] fully stepped on, and made no apologies for.

RN: Yeah, you think? Like when Samantha gets arrested. And that’s one of the things I didn’t want to do, because I am both: I am Arab, and I am Canadian. And what I didn’t want to do is go to the Middle East and impose my values and my belief system on them. So I had to be careful. So, for example, Juliet doesn’t become Muslim. And people have actually asked me why she wears the hijab – and I just say, well out of respect. I mean, when you to Italy and you go to an old church, you cover up.

I’ve noticed that this film is being billed as mainly a “Will they or won’t they” romance, but I felt like it was actually more about Juliet and her journey, and how she changes once she experiences Cairo.

RN: I love you! You’re such a woman. Yeah, it’s really about her and him getting to her. And she’s in love with him – and for this memory to live with them forever, it had to end up the way it did. But is a female thing, and part of being a female filmmaker is that I always had my eye on Juliet from start to finish. I delivered the end based on her.

It’s funny, I had a lot of pressure, again, from financiers, saying that I had to be shocking at the end, and do certain things, and I said no. This is a story about Juliet and I’m not gonna sell my heroine out. I’m not.

Well I’m so glad you didn’t And I’m very interested to see what you’re doing next….

RN: I’m doing a thriller next actually! I feel so lucky with this movie, because it has a US Distributor and it’s coming out in August.

Since Three Imaginary Girls is primarily a music site, what kind of music are you listening to right now? Or what inspired you during the filming of Cairo Time?

RN: I am weird. I love everything. I love Arabic music, opera, classic, modern, I’m strange . You should see my iPod. Like from you know – who sings that song, “Sweet Disposition”? [Ed. note: The answer is The Temper Trap] I love that song. I listen to that from Beyonce to Arabic to Opera –  it’s weird.

Who did the score for this film? It was so beautiful…I usually don’t find myself liking that kind of music, but I loved it.

My score for Cairo Time was by Niall Byrne – and I made sure it’s available in iTunes. I love music, and it’s so important to have the right music for a movie.