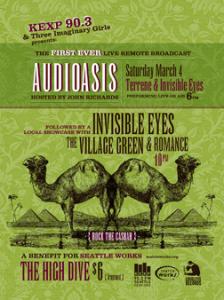 Hey! What are you doing on Saturday night, March 4th? We highly suggest you head to the High Dive for the debut Audioasis Live Remote Broadcast, co-presented by Three Imaginary Girls and featuring four stellar local bands. Plus raffle prizes! Here's the full scoop…

The first Saturday of every month in 2006, eclectic music station KEXP (90.3FM and KEXP.ORG) will broadcast its local music program Audioasis (Saturdays 6-9pm) from the High Dive in Seattle. All door proceeds will benefit a different local charity each month. This is a community initiative to create meaningful connections between KEXP listeners and deserving local charities. KEXP hopes to increase awareness of the mission and work of various local organizations and the impact they have on the larger community. KEXP will provide each charity a variety of ways to increase their visibility. Sounds great to us!

For March, the benefit will be for Seattle Works, the show will be co-presented by Three Imaginary Girls (woot! woot!), and we hear that DJs John Richards, Abe Beeson, and Sean Nelson will all be present. Be there for the first one!

ABOUT KEXP 90.3 FM
KEXP Radio is an influential, innovative non-commercial music radio station based in Seattle, supported by its membership of contributing listeners. KEXP programs a wide and deep mix of music spanning multiple genres, including alternative rock, electronic, hip-hop, roots, country, world, blues and in-depth specialty programs. Listeners enjoy this non-commercial service at 90.3FM in Seattle and throughout the world at http://www.kexp.org.

In the spring of 2004 KEXP.ORG was ranked number six among all audio streaming services on Arbitron's internet broadcasting service and, furthermore, was ranked first among all streaming AM and FM radio stations currently webcasting. Also, K EXP won the Webby for Best Radio Station website in 2004 and in the winter of 2005 won the PLUG Independent Music Award for best Non-Commercial Radio Station.

KEXP has a mission to enrich people's lives culturally by providing a wide and deep array of music, and technologically by exploring, developing and applying relevant technology to deepen or extend music experiences. Past first-ever technology services include KEXP's 14-Day online streaming archive where listeners can listen to any portion of the past fourteen days of programming, its online real time playlist where listeners can discover what is being played, and its 1.4 megabits per second uncompressed audio stream. All of these projects were developed in partnership with the world-class computing and networking experts at the University of Washington.

The station is governed by the Friends of KEXP, a non-profit organization operating the station on behalf of the University of Washington, which holds the FCC license. Experience Music Project provides generous financial support and the University of Washington computing and communications group provides KEXP with streaming services, technical support, development of new streaming applications and other technical developments.