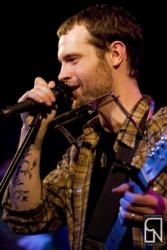 For those of you who don't know about Rocky Votolato, or those who haven't heard his new record, Makers, take your hand out of your pants, wipe your brow, and get with the eff-ing program. His first release with Barsuk "We don't need no stinkin' Death Cab" Records (in cooperation with his long-time label, Second Nature Recordings), it's a fantastic exploration into the bowels of the songwriting craft.

His family is a fixture in the Seattle music community (brother Cody is a founding member of the Blood Brothers, other brother Sonny can be heard under the moniker Blue Checkered Record Player and playing guitar with Slender Means). Rocky Votolato is the 28-year-old father of two Texans keeping fireside drinking music alive and well. His past two records — Burning my Travels Clean and Suicide Medicine — were excellent examples of how much raw, rock and roll emotion can be brought across with just a harmonica and acoustic guitar; often, his songs sound as though they're the acoustic versions of full-blown Pearl Jam compositions.

Last week I had the pleasure of attending one of the single most invigorating solo performances I've ever had the privilege of attending (and I ain't no Show Virgin). Taking a long subway ride out to Park Slope, Brooklyn, I expected a modest crowd of relocated Seattle-ites like myself; the same crowds that attended the U.S.E. show at the Knitting Factory or the Dolour/The Catch show at Pianos. What I got was something else entirely.

The Southpaw was crowded upon entering. A modestly-sized club not unlike Seattle's Chop Suey, there are tables at which to sit, chat and enjoy the performers. The scene was as set as such upon my entering mid-awesome-Luke-Temple-set. Another fantastic Seattle phenom, Luke Temple's record Hold a Match for a Gasoline World was a fixture in 2005's Best of the Northwest Listalbeit mor — e my own personal favorite than a collective choice (even the Imaginary World has occasional disagreements, although mostly over favorite candies and Magnetic Fields songs).

Sitting on the floor with my back against a photo booth, I looked very much the hipster I pretend not to be, sketching the stage furiously in a notebook, sucking periodically from a bottle of Red Stripe.

Then something curious happened-Rocky came out and the crowd went absolutely bananas. Like monkeys cheering a banana manufacturer. They ran to the front of the stage, a Surging Flesh unable to control itself. My reaction:

After his entrance and initial cordialisms, there then ensued a solo electric guitar and harmonica performance as subtly powerful in its instrumentation as acoustic Pearl Jam or moments of Nirvana Unplugged. Indeed, the screams at the end of the title track to his last record, "Suicide Medicine," affected in my body an uncannily similar nerve previously reserved for moments such as Kurt's last screams on "Where Did You Sleep Last Night?"

Rocky took the crowd through a set of mostly new material, Makers having been released not long ago, but long enough it seems for some people to sing along and shout out the names of songs for his set list consideration. He began with "Portland is Leaving," noted in my notebook as containing the best lyric of the new record: "I'm a punchline who is punch-drunk with my fist in a broken mirror." From there he regaled us with "White Daisy Passing," a song from which the first chord drew crashing cheers and flashing cameras. Both album tracks, incidentally, are available for free courtesy of Barsuk's website. The recorded version of the latter, I think most will find, firmly identifies Rocky as Seattle's grungier and more testicled Iron and Wine.

The intimacy of the performance was a tribute to Rocky's voice and interaction with the crowd. He himself seemed slightly stunned, nay, flattered, by the amount of people in the club. And not that they were just there, but they were there listening intent as a college lecture class before a final. No one wanted to miss a beat, a strum, a lyric, a whisper.

Sadly, the set seemed to end as quickly as it had begun — Rocky not anticipating playing for as long as it seemed the club would allow.

"Umm, I really only prepared one more song…is there anything you guys really want to hear?" he asks.

About a dozen people reply at once, followed by another dozen. Through the din I distinguish one man yelling consistently for "Montana," a song Rocky says he wishes he could remember.

"A Waxwing cover!" someone screams, citing the punk group Rocky and brother Cody played in for some time. "Waxwing cover? Oh, you guys are killing me…" he said, smiling huge. Then: "Okay, I think I heard someone say 'Suicide Medicine,'" and, appealing for the crowd to help with the high notes, somehow manages to make his single voice and single guitar reach sonic levels unparalleled so far that night.

For the last song of the night (we thought) he played "Makers," the title track of the new record, and dedicated it to the present friend who helped inspire it.

"Filling and refilling up the glass with makers / we both agreed / The Final Moment! the sweetest remedy to ever be delivered!" he sings, thanks the throbbing and flashing crowd, and exits to the rear.

Then something I hadn't seen in a long, long time happened: A Real, Honest-to-God, Unplanned Encore. The crowd just kept cheering, and Rocky eventually came back out, looking flustered and laughing. Wasn't he out of songs? The crowd of Rocky Lovers went wild, and he apologized for having to play tracks off the new record: "I just don't know the old ones anymore," he said to sighs of wishes for classics like "Montana."

Really out of songs, he says "I wrote this song for my son," and begins the chords to "Streetlights."

"When I woke up this morning / seems like I've got so much more to lose now than I ever had before," he sings.

"Awwww," cries the loving crowd, sincerely, loving every minute of what was, for me, the best Rocky concert I've ever seen, playing the best Rocky album yet.