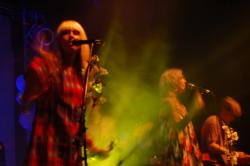 Tilly and the Wall at the Echoplex in LA

This was my 4th time seeing Omaha's Tilly and the Wall and only my 2nd time seeing a show at Silverlake's elusive Echoplex, and upon first listen I wasn't sure that the two were meant to be together. I'll say with confidence that the sound issues were the fault of the venue and not at all of the band themselves, who yelled variations of "f*** shit up" and played their little hearts out for the kids.

The place was full, but not so crowded that you had to jostle the person next to you at the risk of getting a black eye — but there were probably not many black eyes to be had anyway… these are indie pop kids we're talking about, after all. I unfortunately got to the venue too late to catch openers Castledoor, who are making their way rapidly around the East LA indie scene — but they'll be up in Seattle next week and are definitely worth catching.

The five requisite members of Tilly and the Wall were joined by an additional guitarist and a drummer, the latter of whom played on more songs this time than I remembered in previous sets. They stuck to mostly new material off of this year's O, which had much more of a rock vibe and relied less on multi-layered vocal harmonies than the songs from Bottoms of Barrels and Wild Like Children. The full-on 80s dance number "Beat Control" got some very surprised looks from the people I was with, but in the end turned out to be more than a pleasant surprise.

It seemed that the band is relying more on the drums than the tap dancing skills courtesy of Jamie Pressnall, the inclusion of which gives the music a lot of its charm. Some of the songs had both tap dancing and drums, but the tapping was obviously hard to hear over the beat.

The 3-song encore ("Freest Man," "Fell Down The Stairs," "Nights of the Living Dead") was hands down the best part, replete with tunes that were made for the end-of-show singalong. I couldn't think of a more perfect closer than "Nights of the Living Dead," which bassist/vocalist Neelie Jenkins said was "for your city, and for our city too." The song recalls crazy teenage debauchery, sexual discovery, and dislike for authority — almost as if to say "don't trust anyone over 30."

All of the band members are so ridiculously genuine on stage and have such an awesome appreciation for their fans that it's hard to ever utter a negative word about them – and if they keep it up, no one will ever have to.