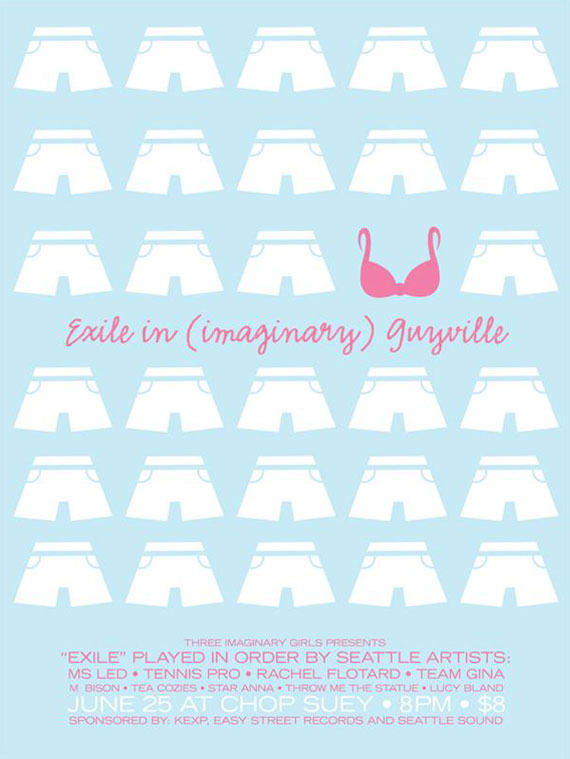 T-minus 5 days: Exile in {Imaginary} Girlville: Poster of the Week! Stranger Suggests! And TIG on KEXP

The night celebrates both the 15th anniversary re-release of the record as well as TIG's sixth birthday party and it's going to be more fun than a barrel of monkeys.

Today we're all kinds of excited because our event has been honored by two of our most favorite Seatte institutions: the Stranger and KEXP.

The Stranger was kind enough to make Exile in {Imaginary} Girlville the recommend event of the day for Wednesday — lookie what they had to say:

In 1993, a whole bunch of people met and fell in love with a record that would quickly distinguish itself as one of indie rock's greatest—Exile in Guyville, Liz Phair's career-engendering, critics'-poll-topping debut that recalibrated expectations of what a girl and her guitar could do. Tonight, Three Imaginary Girls honors Guyville's 15th anniversary with a slew of local folks—including Rachel Flotard, Ms. Led, Throw Me the Statue, Team Gina, and Tennis Pro—playing Guyville start to finish. (Cohosted by yours truly.) (Chop Suey, 1325 E Madison St, 324-8000. 8 pm, $8, 21+.) David Schmader

The Stranger also picked the poster — made my the amazing Rick at Seattle Show Posters — as the Poster of the Week!

This week's poster comes to us from Seattle Show Posters (www.seattleshowposters.com) via Three Imaginary Girls. SSP brings a stylish, '50s-influenced look to its work for bands such as the Velvet Teen, Tullycraft, and Poison the Well. This show marks TIG's sixth anniversary.

Exile In (Imaginary) Girlville An Exile in Guyville Tribute Night

And lastly (and certainly not leastly), tomorrow evening (Saturday, June 21), Three Imaginary Girls will be joining DJ Hannah Levin for KEXP's Audioasis, the local music show, where we're going to talk about the event and spin some great tunes from local bands — perhaps even some of the bands playing at our show.