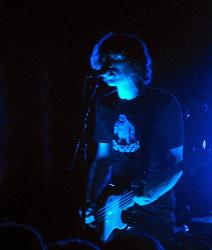 I believe the City of Seattle has the safety of their citizens in mind when they initiated “Operation Sobering Thought.” I believe it was wise and prudent for the mayor to ask for regulations that allow his office to suspend nightclub permits without a hearing. I believe that the City was concerned solely with being a good neighbor when they told Chop Suey to turn down the noise. I believe the City was looking out for the children when they told gay bars on Capitol Hill to take down the gay porn. I now believe the City is concerned with the safety when they cut the capacity of Neumo’s in half. I believe it is necessary for me, after using the restroom, to not be allowed to enter the band room until someone exits to use the restroom. Mayor Greg Nickels said that he supports a safe and healthy nightlife. I believe him so I voted for him.

All this was hanging over my head when I went to Neumo’s on Sunday night to catch Tokyo Police Club. It was a “sold out” show but in the current nightclub conditions in Seattle, selling out Neumo’s is the equivalent of lowering a basketball hoop to six feet and saying you can slam dunk.

Alas, all of that has little to do with Tokyo Police Club, who did deliver an excellent set to the large underage crowd on Sunday night.

Prior to this show, iTunes said I have listened to TPC’s debut album Elephant Shell seven times yet I don’t think I could identify one song from it if it came on the radio. Maybe “Your English Is Good.” I’m not saying I didn’t like it at all. In fact, far from it, I just don’t think TPC is a very innovative band. Moreover, if I disliked the album, I wouldn’t have bothered showing up for this show. Their guitar parts and basslines are familiar pop-punk. I disagree with my very smart TIG colleague, Diana Salier, who absolutely loved this record, but to me it sounds like a Death Cab for Cutie record with louder guitar chords. Singer/bassist Dave Monks even sounds a lot like Benjamin Gibbard to me. I won’t get upset if it comes on and will generally rock out to it, but there are about 40 records from 2008 so far that I will reach for first.

Live, though, TPC is a different animal altogether. They were energetic, burning through their catalogue for over an hour. One song after another, they challenged the kids to keep up and dance with them. And they did – probably a little too aggressively. I wasn’t about to shout “get off of my lawn” or anything but it was obvious that a lot of people in the front were bothered that people were bumping hard into them while they were trying to enjoy the show. Remember kids: slam dancing should be like sex; it is only acceptable if everyone involved consents. With the room being as spacious and empty as it was, they could have been more considerate and moved back when they weren’t in so many people’s way.

TPC’s set was one long burst of rock and roll. Their catalogue doesn’t include many ballads and I don’t remember them playing any, thus giving anyone a chance to catch their breath. The most energetic part of the set was when the band played “Your English Is Good” and got 400 of his most devoted followers to sing (and shout) along to every word. The same goes for “Cheer It On” and “Tessellate.” Monks, wearing a t-shirt of opening act Smoosh, could have gotten the teens in the crowd to follow him anywhere.

Elephant Shell never grabbed me the way that other albums from young bands like Be Your Own Pet’s Get Awkward or Sons and Daughters’ This Gift have but I was thoroughly impressed with TPC’s live show. I’m ready to give their album another listen. The eighth time’s the charm, I’m sure.