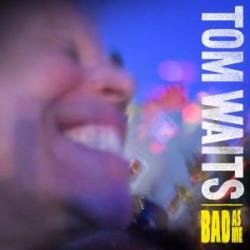 Tom Waits: Bad As Me

Tom Waits has had an incredible career in that he has managed to somehow careen in the opposite direction of most artists: his first records are his lightest, most palatable ones — for example, Closing Time almost sounding like The Eagles at moments — and his later albums just get stranger and more uncompromising with time. (It is impossible to deny that if Waits heard Real Gone in 1973, he likely would have fallen over.) He has also achieved something that I cannot say any other musician of his age has done, which is span several decades without making one lousy or even mediocre album. This accomplishment alone sets him apart from nearly all of his contemporaries. And with this in mind, we have his new release Bad As Me, an album that explores the musical territory one would expect, but does not whatsoever translate as mundane. It will come as no surprise to state simply that this is yet another beautifully alien collection of songs from the now 61 year-old legend.

Bad As Me features some high profile guests such as Keith Richards, Flea and Les Claypool, all of which seem anathema to Waits’ songwriting style — but somehow, they tastefully lend their talents to the songs that they are involved in without overplaying or sounding out of character with the feel of the album. In fact, if one hadn’t scrutinized the liner notes, you would never know that these musicians were involved in the recording. (Richards must be thrilled to still be involved with a record that is worth listening to!) Aside from the odd collaboration with Waits, one can't think of much else that he has touched in the last thirty years that warrants repeat listening.

Stylistically, the album follows the trajectory that one would anticipate, as tere are certainly elements of previous records present. Bone Machine is recalled in the vocals on “Talking at the Same Time.” The Swordfishtrombones sound is revisited on “Satisfied,” which is not too dissimilar from “16 Shells From A 30.06.” Most strikingly, the track “Kiss Me” provides the earliest reference point on Bad As Me. In fact, reference point isn’t even adequate as the track sounds like a sequel to “Blue Valentines,” only written thirty-three years later. This is particularly surprising, as Waits rarely delves into the song structures and styles that he used on his albums in the 1970s.

There is also the anachronistic swing of “Get Lost,” which sounds like a 1950s garage rockabilly number. Of course, it features Waits’ demented variation on such a style of song, making it all the more enjoyable. “Hell Broke Luce” contains classic dark humor and includes a variety of typically amusing lines such as “Get me another body bag, the body bag’s full.” The deluxe version is the recommended, as it contains three bonus songs that stack up with everything on the main album. “Tell Me,” for instance, is a heart-rending ballad that is effectively sentimental and romantic. “Why does a bird build its nest so high,” Waits intones as if he feels the sorrow of mere existence in every cell in his lungs and teeth. His pain and maudlin delivery is starkly believable.

So with Bad As Me being Waits’ twentieth album (excluding the live Big Time and Glitter And Doom releases), clearly the legendary iconoclast is continuing down the dusty path that leads him onward. However many more records he bestows us with in his lifetime, it seems safe to say at this point that his entire catalog will not contain one dud. Not only this, but his newest offerings are still indispensible, something that cannot be said for nearly every other decade spanning artist that one can muster a thought of.