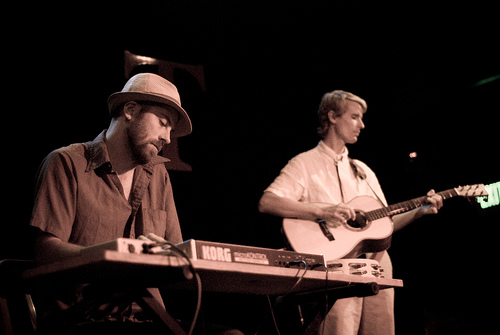 Shy Midwesterner, Tom Brosseau, claimed the stage dressed like a Sears fashion model with a white shirt, Dockers slacks and a bolo tie. He appears like a figure trapped in the 1950s and his music reflects this anachronism quite well. His newest record, Posthumous Success, is a rootsy collection of country folk. Live, he reconstructed this sound as his set consisted of old style acoustic songs and some electric ones where his tenor voice walked a tenuous line between being frail and commanding.

“My Favorite Color Blue,” from the new album, was preempted with some amusing background information. Brosseau explained that the song is about a recurring dream that features Dave Grohl of Foo Fighters and Nirvana fame. From the lyrics of the song, it is difficult to decipher if this explanation was true or not. Maybe Brosseau was joking, but one got the feeling that his story was in earnest.

“Haven’t I Been True” was one of the evening’s highlights. Also from the new record, the innocence of the song was striking. Brosseau on stage seemed so vulnerable and altogether out of time, yet at the same time he recalls the timelessness of figures such as Johnny Cash with his demeanor and classic Sun Records style guitar picking.

There were also some interesting choices of covers performed. A very country version of “Innocent When You Dream” by Tom Waits was played as was a Frank Black number. Before beginning a fabulous cover of Black’s “I Burn Today,” Brosseau said something to the extent that people never perform Black’s solo songs, only those by the Pixies and that his solo material is under-appreciated.  This still did not stop him from teasing the audience by playing a few bars of “Where Is My Mind” before smiling and launching into the chosen cover.

The crowd was fairly small and the intimacy of both the venue and the atmosphere was perfect for Brosseau with his lonely songs. In the new song, “You Don’t Know My Friends,” he sings a list of heartbroken lines like “Why can’t you just accept me the way I am” and “I mean really, how fucking low can you get?” These were just the type of aphorisms that he was wielding in his strong performance that evening.

{All photos by Hot Avocados Photography} 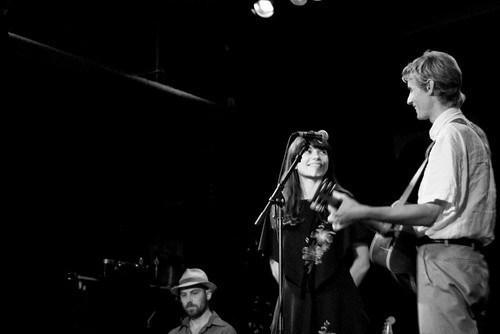 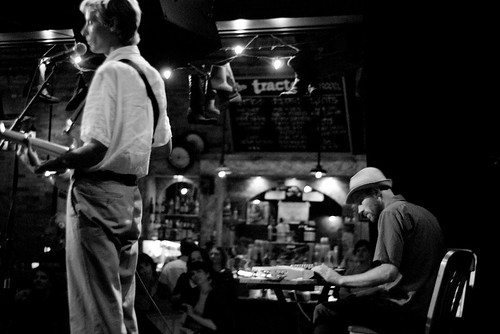