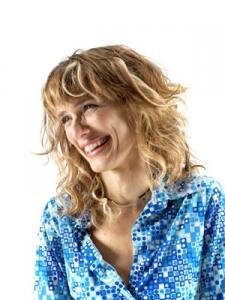 Her second feature, My Effortless Brilliance, played at SIFF in 2008. It also deals with a friendship of two men, who are played by musicians Sean Nelson (of Harvey Danger) and Basil Harris (of “Awesome”). It was also a great film that explored the egos and relationship of those characters. It also has several themes that lead into Humpday.

Lynn Shelton is one of those people you meet that no one has a negative thing to say about them, and it’s all true. When I interviewed The Stranger Genius Award winner a few days before Humpday screened as the Centerpiece film at SIFF, I wish I had let my tape recorder run for about five minutes longer because she had several very positive things to say about the cast and crew of all of her films and said she felt really lucky and fortunate to have worked with the people she has.

How did the idea for Humpday come about?

Well, my first film, We Go Way Back, was made in a traditional manner well I just sat down and wrote the script and thought of these characters in my head and once the script was done I went out into the world and looked for somebody to fit these roles I made up. It’s especially a hard thing to do with such a smaller town like Seattle if you want to make a film regionally: you don’t have thousands of twenty-three year olds that you can audition; you have about forty; same with women in their twenties. They’re all great actors or actresses but no one is going to perfectly fit the idea you have in your head.

I also found that traditional filmmaking method, which is my first time on a set, I never went to film school, I was an editor and so I learned how to tell stories cinematically through editing but I had never been on a film set before. With having an acting background I found it was so hard on the actor, that’s not bad if you have well-trained actors used to being in front of the camera, but all of these theater actors who were so great in auditions were just relaxed and natural in the audition but when they get in an artificial environment they have a harder time being at ease. I started to fantasize about creating a completely actor-centered set. My Effortless Brilliance was a total experiment; I didn’t even know if it was possible to work that way. I knew other people employed some of the elements I employed but this was my own specific recipe. I started with a person that I wanted to work with and adding people to that and custom designing characters for them and allowing them to participate in the development of their own character so it wouldn’t be this far reach, it would be an easy, glove-like fit. Once I knew who the characters were I could really figure out how they would interact with one another and really cement what was going to happen in the film. When I show up on set I have a really structured outline but I don’t have a script because I want them to provide the words because I think they can come up with more naturalistic writing than I would be able to.

It’s like setting up a false documentary in a way because you’re creating this scenario and everyone has tons of back story and they really know who they are and we talk and talk and talk before shooting each scene. We have two cameras and I let them go and it’ll often be a twenty or thirty minute take. Maybe we’ll do that two or three times. And then in the edit room is where it all gets carved out and really written, like a documentary. You’ve got hours and hours of footage and have to figure out how you’re going to find the nugget of the story. The final draft of the script really comes in the edit room.

The starting point for Humpday was Mark Duplass, who I met and really wanted to work with. We bonded as filmmakers and people but I saw him on the set of this other film, True Adolescents, that was shooting up here and I was the still photographer and got to see him acting first-hand, so I knew I wanted to use him as actor. He said “pitch me an idea” and he went back to LA and about a month later a friend who was staying at my place in Seattle went to see Hump and he had a really interesting response to the gay porn that he had seen, which he never sought out before, he’s straight. He just kept talking about, it was the main thing he would talk about and after a couple of days I started thinking about the relationship between straight guys and gayness. It’s obviously different for everybody but I have noticed that straight guys happen to be more attached to their sexual identities as straight guys than most people; they’re nervous and there’s this anxiety around them that everybody knows they’re straight. They have to be cool, especially these days, with broaching gayness; it’s not cool to be homophobic and they’re cool to have gay friends, it’s fine if everyone else is gay, that’s fine as long as everyone else knows they’re straight. You know what I mean? There’s this attachment and anxiety that maybe they’re secretly gay. I don’t know, it’s just really interesting. It’s not everybody but I did notice a lot of straight guys have this weird anxiety, so I thought it would be an interesting challenge to get two straight guys and box themselves into this bizarre mutual dare and get it into their heads that they have to do this and have sex together. That was the starting point of the film and it devolved into where it went.

Yeah, much more about the male ego and relationships, I think. It’s about marriage and friendship and male ego but it’s also about these two guys going through an identity crisis with each other. It’s in a way like seeing an old friend from a long time, like ten years, and examining the past that you had and you size up your own life, like a mirror is being held up to your life. I think it’s a very common experience. It’s interesting how they engender identity crises in each other and have this sense of competition. Other straight girls, other women have competitions too but there’s something about certain straight guys together that can be really funny.

I agree. I also thought the character you played, Monica, upped the stakes with the film and set it on the path it followed, especially the scene that took place in bed in the middle of the film. I thought it was the turning point in the film.

I’m glad you said that because that was a scene I’m particularly proud of. I wanted to accomplish a few things with that scene: one was to show that people are able to be fluid with their sexuality, and these two women are fine with being able to be fluid and have fun and be comfortable in their skin at the same time it’s this opportunity for (Andrew) to be challenged. That character’s whole identity is based on this idea he has of himself that he’s open-minded, adventurous and he’s coming up against his own limitations. I think it makes him more sympathetic; it’s this opportunity for us to feel for him because he finds the edges of where he’s actually able to go.

I really thought there were a few scenes from My Effortless Brilliance that led indirectly into Humpday. One was where Eric, Sean Nelson’s character, was being interviewed by the flirty writer.

That’s really interesting; no one has made that comparison before but I think you’re right. I am really interested in the poignancy of people trying to connect and not quite being able to, the sort of awkwardness.

What else are you working on? Did I hear correctly that you filmed another film with Sean?

No, no. I am planning to. I have an idea for a film that hopefully we will be shooting in the fall or winter. It’s not a remake at all but it’s modeled on the structure of My Dinner with Andre. It’s going to be Sean playing a version of Sean, and I’ll probably use their own names, too, as a journalist and Sherman Alexie and Sherman will be playing a version of himself. It’ll take place in a restaurant and it’ll be these two guys talking over dinner. I’m really, really excited about this film. There are a lot of unanswered questions I don’t think I’ll know until we’re actually shooting but it could fall flat on its face, too. But I have a really good feeling about it.

Another opportunity came up before that and I was intrigued enough to take it on. If all goes well, I’ll be shooting a web series for MTV.com that is a Seattle version of web series developed by Craig Brewer, who directed Hustle & Flow, but he developed a web series for MTV called “Five Dollar Cover: Memphis” and he based the narrative on the lives of these musicians and their soap opera-type stories and they’re performing. The producer from MTV saw Humpday at Sundance and really enjoyed it and said I would be a really good candidate to direct the Seattle version of this web series. If it gets green lit we’ll start shooting in the summer. It’s an interesting hybrid between a documentary and docudrama. The form is also really interesting: these six-to-eight minute episodes where you drop in, it’s like a short story and there isn’t a lot of time for an intricate back story or development, it’s just dropping in and dropping out.