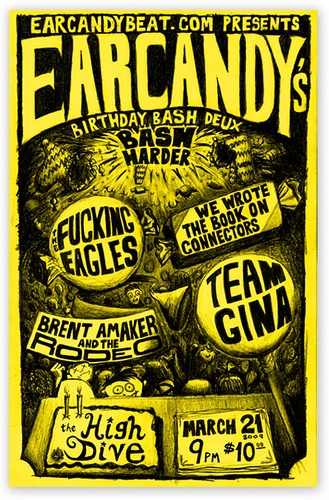 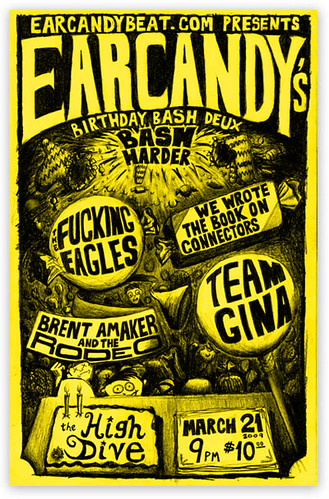 This show would have gotten my recommendation for the night even if it wasn't celebrating the second anniversary of my friend Travis Hay's excellent blog from the PI, Ear Candy, and the launch of his new, also excellent, northwest music site Ear Candy Beat.

This is such a great bill because each band is exponentially different from the one that preceded it and the one to follow. Team Gina starts off with their fun, lesbian hip hop and then We Wrote the Book on Connectors are next with their silly "mustache rock". Brent Amaker and the Rodeo is next is some great country music and the night is closed out by They Live, a promising new rap duo of Gatsby (from Cancer Rising, aka Larry Mizell, Jr., the great hip hop columnist for The Stranger) and BlesOne.

They Live was a last-minute addition to the bill when those fucking Fucking Eagles had to drop off the lineup due to a family emergency but They Live will surely close out one of the best parties of the weekend in style. It starts around 9 and costs $10 to get in the door, 21+.

What's on your calendar for the night?