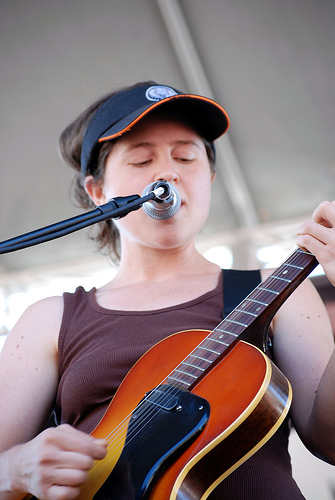 Mirah is like yoga, Italy, and pizza… it's rare to hear an ill word said about any of them. She hardly needs me to list her finest attributes to convince you to go see her tonight at The Vera Project — except to say that you wont be disappointed. And, who knows who you'll run into at the show? She really attracts the nice folks.

If that's not your style, you can join me at Conor Byrne's (in Ballard) to see the return of the Dexter Street Jug Band. They are back together after a few month's hiatus to celebrate their record release!

They are a KEXP side project. The story goes that The Roadhouse crew at KEXP staged a low-budget American Idol over the radio. As they tell it: "We searched hi & lo, not for Idols, but for train ridin' hobos and jug blowin' fools. We held live auditions, judged their skillz and style, and voted along with the you listeners to pick five players to join bandleader Levi Fuller. And a jug band was formed."

Complete with kazoos! Oh yeah, that's another thing that's hard to speak ill of… who doesn't love a kazoo solo?

If either of those aren't what you're looking for, there's ArtWalk (oh my it's already first Thursday) or any of these fine events as listed on TIG's show calendar:

What are you up to tonight? Have you already started planning for the weekend? It's gonna be a good one!

(Thanks for the photo, Chona Kasinger!)