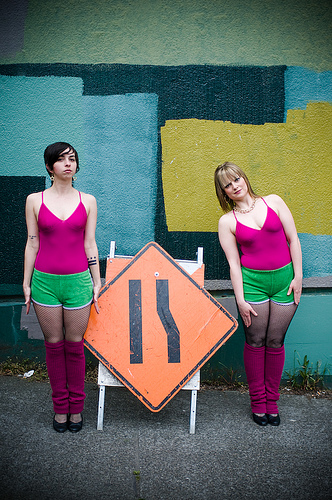 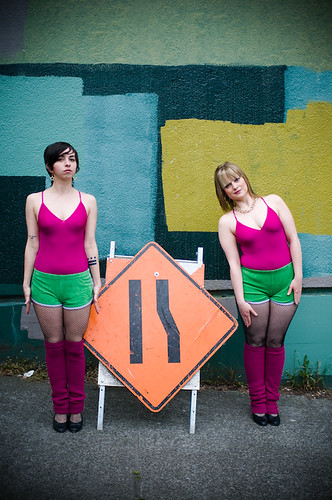 Jesus Christ, there is a lot going on tonight. A lot. Glass Candy at Nectar, The Roots at the Paramount, Britney is in Tacoma. Yet, my recommendation is for Team Gina and The Redwood Plan at Chop Suey tonight.

For a while, the calendar on Chop Suey's website said this was Team Gina's final show. It's not, but it might be their final show for a while. I asked the lovely Gina Bling when they played at the High Dive last month what was going on with the band and she said they're taking a break from shows to work on a new album. She was excited for one particular song about how Barack Obama is sexy.

Their last album was Products of the Eighties and my friend Imaginary Shrie wrote of it:

Their mantra seems to be ridiculously danceable feminist hip hop delivered by means of raw vocals over sparse Casio beats. Picture two headbanded, heel-wearing sexies sucking on gigantic lollipops and hitting on your kid sister outside of the sneaker store: this is Team Gina.

Reminiscent of Gravy Train!!! or Peaches, with a hint of Jewish white boy rapper MC Paul Barman, Team Gina lay it down with glitzy panache, but not without worthy purpose. The Ginas meld slumber party worthy shout-alongs with liberal political leanings in a very self-aware, and for lack of a better word, FUN way. They're educating us about AIDS while slathering the track with synthy Milli Vanilli beats. They righteously hail the wonders of breasts, theirs in particular, touting "if my tits were a hotel they'd be four stars". Maybe I've been listening to too much Team Gina, but "Boobies" is a breast cancer awareness advertisement waiting to happen.

Also on the bill is The Redwood Plan, arguably the best new band in Seattle. Led by Lesli Wood, formerly of Ms. Led and also featuring Jamie Hellgate of H is for Hellgate, The Redwood Plan is an energetic, dance punk band that will kick your ass and get you to move yours. After their star-making performance at the Sunset last month (which was broadcast live on KEXP), they've been one of the most buzzed-about bands in the Northwest – and for good reason. Here's a clip of the band playing in Denver last month:

If that isn't up your alley, something else will be. Like…