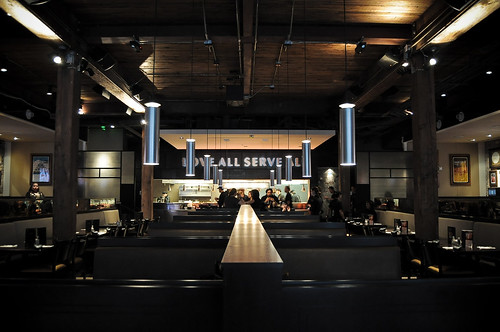 On Wednesday, the Seattle Hard Rock Café opened its doors at First Avenue and Pike Street. Overall, I think it’s a very good thing for Seattle and Seattle music, but first let’s talk about the Wikipedia/press release details.

The Hard Rock Café in Seattle will be one of more than 150 locations worldwide. In an economy where the unemployment rate has been hovering around 10%, this restaurant put somewhere around 150 employees through orientation. The space is two stories high and occupies about 14,000 square feet. Before the lobby of the Hard Rock was a lobby of the Hard Rock, it was a pawn shop; the second floor, where there is a bar and restaurant and music venue was previously an adult bookstore. While I’m not necessarily in favor of pushing pawn shops or porn stores out of the way to make room for a corporate chain of restaurants on principle (and one directly across the street from where another burger chain fizzled: Johnny Rockets), combined, I doubt either of those seedy businesses ever had payrolls approaching 150 people. 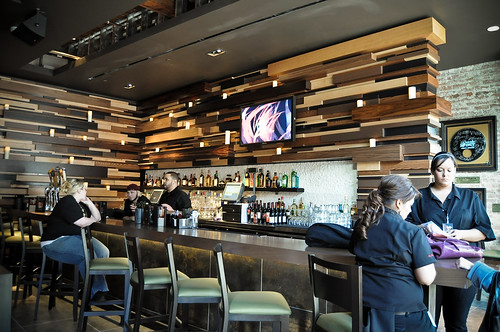 The roof of the space was converted to an outdoor patio with gas fires to keep warm. The view from there of Puget Sound is breathtakingly beautiful and with a bar and a capacity of around 80 people. I want to have my next birthday party there; even if it is outdoors and my birthday is in January. 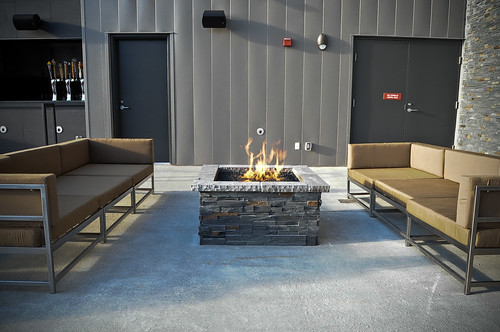 To me, the memorabilia is both very impressive and the most underwhelming aspect of the tour that I and a handful of other media representatives experienced two days prior to its opening. Some of the items are stunning, such as guitars used by Eddie Vedder and Kurt Cobain or the topper on Courtney Love and Cobain’s wedding cake. Grunge was very well represented although I’m not convinced it’s a story that hasn’t already been told so often it’s familiar, but, moreover, does the Hard Rock have the credibility to tell that particular story after the Vegas hotel and casino altered one of Cobain’s guitars to censor an expletive?

You could learn a lot about the genre from the exhibits on display, as well as the audio tour where you can call on your cell phone to hear recorded details on items throughout the restaurant. We were told that it is the first location to offer that service, which I think is a good thing because I believe the stories behind each item are more interesting than the item itself. 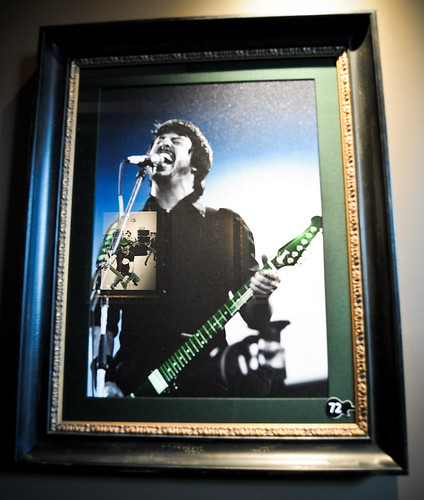 I found the memorabilia less thrilling overall but am still enthusiastically bullish on the restaurant as a whole. Moreover, I asked a curator during our tour whether or not riot grrrl was represented here and it wasn’t. One photographer noted to me that also missing weren’t just influential riot grrrl bands like Sleater-Kinney and Bikini Kill, but other Northwest bands who were wildly successful more recently, like Modest Mouse and Death Cab for Cutie. Certainly, though, it doesn’t take a focus group or an advanced degree in marketing to tell you that Eddie Vedder’s guitar will sell more cheeseburgers than Carrie Brownstein’s would. 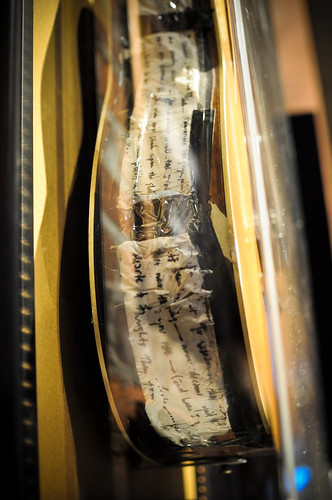 The curator did explain that his approach was to find acts that are either from Seattle or played here, so that may explain those omissions: Modest Mouse (Issaquah), Sleater-Kinney (Olympia) and Death Cab (Bellingham) have their origins outside of the city. The inclusion of acts that have played in Seattle is hardly exclusive, though: I’m not sure I can name any major acts that have never played a Seattle stage. I know Elvis, The Beatles and Led Zeppelin have had memorable instances in their respective careers in the 206 area code.

One cool thing about the dining and memorabilia experience is that each booth has an interactive monitor that lets you learn about certain items as well as zoom in close enough to notice small details on each item.

The Hard Rock Café will still be the spot for tourists to eat Sgt. Pepper’s Lonely Hearts Club Sandwich underneath Eddie Vedder’s guitar while hearing U2 and Stevie Ray Vaughan overhead. Ok, the club sandwich part I made up (or maybe remember from a previous trip to the since-closed Hard Rock in Vancouver years ago with my family, but it’s not on the list of menu items I was given), but that isn’t to say that’s all that it is. 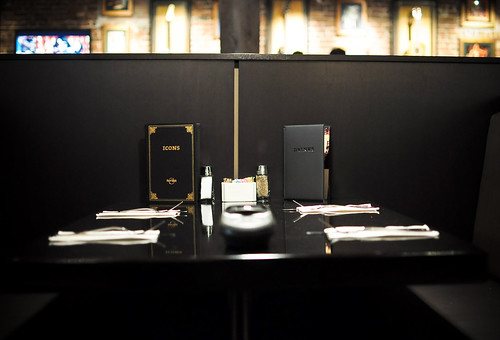 I certainly agree, but I wasn’t the first to note that arguably the savviest move the Hard Rock made in Seattle was hiring Amy Bauer as part of their sales and marketing team and as their booker. Bauer, as many Seattle music insiders know, spent many years running day-to-day operations for Loveless Records (the label co-owned by John Richards of KEXP), where they released several albums by local artists like Voyager One, New Faces, Pris, Vendetta Red and Carrie Akre. I met Bauer for the first time just a little over a week before this tour at a party for the Grammy Awards and she was very excited then to tell me some of the ideas that she had for booking shows at the Hard Rock. She hasn’t unveiled a full schedule but did say that she planned on having Tuesday night residencies with local artists, labels or blogs booking weekly shows for a month. Another idea she floated was all-ages matinee shows on weekends. Those aren’t the ideas of a corporation conscience of their bottom line but of someone given the opportunity to be a part of the community it serves. Not entirely unrelated, the Hard Rock will serve Caffe Vita coffee.

I did ask Bauer how aggressively she would pursue booking out-of-town acts and she said that she wasn’t there to compete with their neighbors at the Showbox at the Market but wanted to be the place where those acts come for dinner; she noted the capacity of the Hard Rock compared to the Showbox’s (477 vs. 1200ish). While that’s true, the space is more comparable to the Crocodile’s (whose capacity is around 560) and Chop Suey (which has a similar capacity to the Hard Rock). 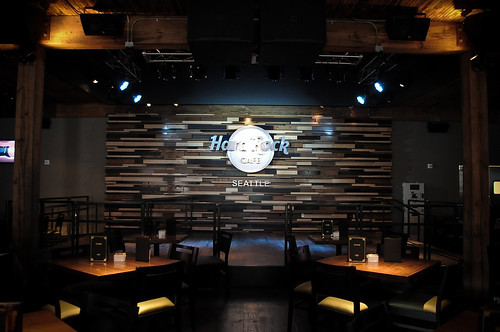 We’ll have to wait until her schedule is revealed, but from the time I’ve spent talking to Bauer, she doesn’t see the Hard Rock as competition for any live music venue but as another place for bands to play. Of course, every thriving scene needs more, not fewer, venues for artists to perform. Moreover, if the restaurant was going to be a major player in luring high-profile acts, that would have been a focus of the tour and the shows would have already been announced.

Early March is when Bauer said that live music would begin. Thus far, the only band I know of to announce they are playing at the Hard Rock is the hip hop/rock hybrid Eli Porter, who revealed they are playing March 6 on Twitter and on their website.

The staffers I spoke with who had backgrounds in music or were familiar with this scene were not hesitant to say that they were worried about how they’d be received in Seattle. Seattle, unlike a lot of other major cities, has a strong indie rock ethos and is protective of that ideal (even if bands like Death Cab and Modest Mouse are no longer “indie” and have considerable mainstream success). That’s certainly true, but a music community that cares about itself is hardly a bad thing. Moreover, the link I included above about the Vegas hotel altering Kurt Cobain’s guitar is more than troubling, but if the Hard Rock is going to win over a skeptical audience that could think the chain is already “lame”, they’ll have to do it, like a vice chairman of the Seminole tribe said when they bought the chain, one hamburger at a time. For whatever it is worth, the Seattle Hard Rock Café is definitely not lame: the technology is quite advanced for a restaurant; the rooftop terrace is gorgeous and offers a remarkable view; everyone on the staff I spoke with was friendly, knowledgeable and helpful, including the lovely cashier in the gift shop I talked to when I purchased a pin for a collector in my family; it’s a big improvement to the neighborhood that brought in a lot more jobs and I was assured that diners would be pleased with the happy hour specials on both food and drinks (from 3-6 and 8-10pm).

In the end, though, the Hard Rock Café is still a restaurant and it will either flourish or flounder based on how good the food is and how good it’s served. I haven’t tried it yet, but am anxious to give it a shot. 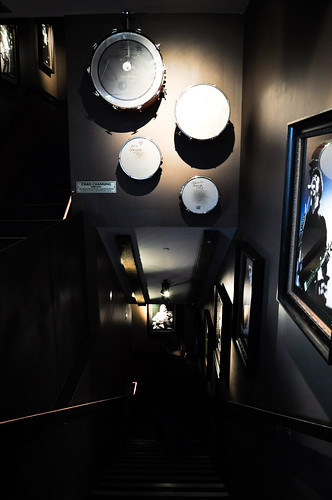 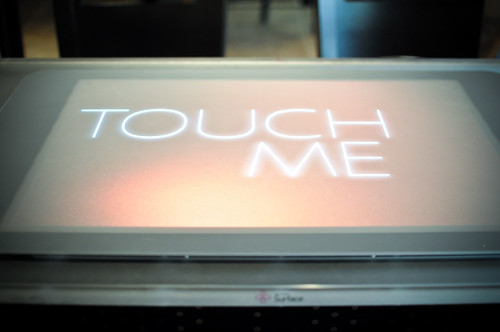 {All photos by Lori Paulson.}