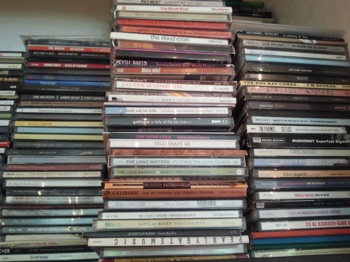 From the towering pile on the corner of the desk: new-ish music we should have listened to by now.

As is the case with many music-appreciating folks, there is the propensity here in the Imaginary Offices to get absolutely inundated with new material. New releases, things that are old but new to us, or old to us but new to you — and sometimes all of the above. It happens so much that, in fact, things can (gasp!) fall through the cracks from time to time.

In the fury of winter’s 2010 best-of lists and this spring’s fleeting bouts of sunshine, there’s been a large, unassuming pile of music that’s been building up over the last few months, begging to be listened to and set free — so instead of fretting that we missed the boat on some of these releases, we’re taking a crack at tackling them. So without further ado, here’s a few things we’ve got in heavy rotation that you undoubtedly should know about by now, and if you don’t, may want to lend your ear to.

Drew Grow and the Pastors’ Wives – S/T
Our friends at Sound on the Sound, along with the rest of the West Coast, have been all over this one for a while now — but we’re just now getting hip to this stellar mix from 2009. In our defense, however, of course we’ve known of DGatPW’s capabilities, we just haven’t dedicated enough time to listen to and sit with everything that’s in the layers here. And man, are we glad we finally did: Grow’s old soul-infused vocals trade out, depending on the track, to channel a Joseph Arthur-like anthematicism, and then bounce partway back to feeling more traditional, then suddenly he hits us with an impossibly modern sound — all the while showing both a range of style and a level of earnestness that’s hard to beat. You can hear the bones in these tracks: the creaks, the history, the things they’ve seen, the pangs of tragedy, the moments of joy. In short? Buy this album. Stat.

Revolver – Music For a While
There’s really no other way to put this: Revolver makes catchy, layered, sometimes smile-y, sometimes ache-y alt.pop songs that are so simple you almost want to… well, hate them. Yet there’s something undeniably good about this band that we just can’t seem to shake off. The lyrics are lacking in complexity at a near-maddening level, and there’s tones of obvious lateral band comparisons throughout (think every obvious Brit pop sensation across the pond from the 60s through the 90s). But one can’t help but hear the notes of “Leave Me Alone” or “It’s Alright” rattling along a back road or embedded perfectly onto a movie soundtrack or a mixtape, or the jumpy “Get Around Town” resounding through a club as part of a pre-show playlist. To sum it up, this album’s not for everyone, but it’s well worth a listen to see if it suits your taste.

Y La Bamba – Lupon
Sparse, sexy, stripped-away sad-chords and jingle-jangle meandering-style storytelling make this album a win, to the point of wanting to go back and redo my top albums of 2010 to find a space for it. YLB manages to haunt, enrapture, inspire, and take us on a journey we’ll come back to over and over again to pick up a piece or see a corner we missed the last time through. Strains of Wye Oak and Heartless Bastards come to mind, and as if that’s not enough to whet your appetite, we found this slice of gorgeousness from 2008 in the process of some light internetting to learn more about the band’s basics. The verdict? Get your hands on everything they’ve ever released, stat. There’s obviously no going wrong with this band.

Frightened Rabbit – Sing the Greys
As is the case with many an artist’s early catalog-era album, you can hear the bones of everything amazing that’s to come from Frightened Rabbit in this 2007 release. Not that this has been sitting on the desk since ’07, of course, but it’s been hanging out in the shrink wrap waiting to be given proper time and attention since the last time Scott Hutchison and company came through town. To be completely honest: is it the best thing FR has ever done? No. Not by a long shot (and not much can compare with The Midnight Organ Fight, anyhow) but it is a must-have-er for any of the band’s diehard fans, namely for the opening track. Having a song in the library that starts out with who needs the blues / when you’ve got the greys? is pretty much mandatory for any inhabitant of the Northwest, Frightened Rabbit fan or not — n’est ce pas? So much so that you’ll put aside the baby-band vibe and the couple of off-key notes in favor of cheering them on to bigger and better things.

Kip Boardman‘s bordering-on-adult-contemporary (but still pretty) The Long Weight, The Oregon Donor‘s promise-showing 2009 release A Pagent’s End, and Nick Jaina‘s A Bird In the Opera House were all lovely enough to save them from a fated trip to the purge pile. Lend them your collective ear to see if there’s anything there to tug at your heartstrings! And PS, stay tuned — there’s still a lot more music to get through, and we’ll post more mini-reviews as quickly as we can flip the records over change the cds.