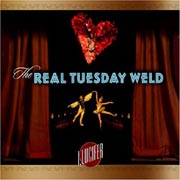 Offered as a soundtrack to Glen Duncan's simultaneously-released novel of the same name, I, Lucifer is, in essence, a song cycle trotting the relationship between God and Lucifer out upon a musty old cabaret stage.

More cinematic than novelistic, these songs succeed in creating a pastiche world: red curtains opening on a shadowy, cobblestone London alleyway, the sounds of 1930's jazz emanating from one doorway, modern electronica from another, while an Ennio Morricone soundtrack booms from the movie house down the road. Imagine Frank's Wild Years as reinterpreted by Serge Gainsbourg and you'd be pretty close. But somehow Stephen Coates, the pseudonymous Real Tuesday Weld, manages to gel all of these disparate influences together into a cohesive and rather lovely whole.

The album opens with a brief reading by the author which sets the tone of theological-debate-as-breakup-song which Coates follows, then immediately shifts tone for "Bathtime in Clerkenwell," a burst of gleeful jibberish that leaves the impression of Esquivel hanging out in a Parisian café. Lest I give the impression that this is some sort of pretentious art project, check out Coates' pop songwriting chops on tunes like "The Ugly and the Beautiful" or "(Still) Terminally Ambivalent Over You," which veer into Magnetic Fields territory with their mood of giddy despair.

Overall, The Real Tuesday Weld manages to conjure an album out of time. Take the track "The Life and Times of the Clerkenwell Kid;" it sounds like a 78-rpm boasting of some ‘40s British noir gangster, while it decries being called "homeboy" and "that east coast/west coast shit." Darkly funny, atmospheric, and moving, I, Lucifer is a great pop record for an alternate universe where the term "pop" needn't be confined to the fashionable definition of its own time, but comfortably spans stylistic decades.