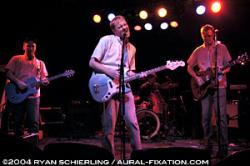 The following are two letters written on different days, but spell-checked and edited on the same day, and then coded for posting very, very early the following day.

Let me be as blunt as possible — I have unplugged my internet connection and now sit in my house at ten in the morning the day after the Tullycraft show at the Crocodile. I was drinking coffee earlier to stay awake as I drove my grandma to the airport, but now I am drinking water because I want to go for a run and it's exceedingly better to have water in one's self than coffee when you make the turn to mile three.

The reason for all the blunt honesty is to more closely relate to you my experience of the band Tullycraft last night. I unplugged the internet so that I can't look up the names of songs or records, since I didn't know any of the names last night. I had heard of the band only in the most imaginary of ways — by seeing it on the billing for the next Three Imaginary Girls show. When I met IgLiz for the first time at the Thermals' CD-release, she made it known to me exactly how imperative it was that I be at the Tullycraft and King of Hawaii show on Thursday. She listed just about all the synonyms for "great" that shift-F7 can supply. In just one word, however, Liz hearts them.

My first contact with Tullycraft began as I was sitting at a table next to IgDana, commenting to the waitress that I wanted to stretch my $1.25 as much as possible, so could I please keep getting my 8 ounces of hummus-colored porcelain refilled with that brilliantly strong coffee? Thanks. Sorry for not tipping you the seventy-five cents of change, but you know how it is. Gas prices and all that. May the Lord bless President Bush and the oil companies, in this, their time of need (for election finances).

So I was being introduced as "the writer who wrote the Iron and Wine reviewthat made Dana cry" to various people rotating through the table, and eventually I was introduced to Sean, Harold and Chris, three nice enough looking guys who seemed too gracious and well-dressed to be in a rocking band. When I found that this was the Tullycraft of recent imaginary fame, I was even more excited to hear them play. Especially after the expression Sean made when Liz suggested that they would have been shoe-ins for the following night's "Seattle's Cutest Band Competition." It was like the look of a man who just found out he was having quadruplets instead of getting the beagle puppy he expected. Later when I described them as "humble," he said it was more "self-deprecation."

So the show itself: Sean played a light blue bass with just the E and D strings… (ending)

Several days pass during which this review sat idly on my hard drive, not writing itself.

Sorry, but that was all the far I got on the review of the show as of last Thursday. I wasn't exactly sure how to approach reviewing a set played by a band I had never heard of before, and don't worry, my internet is still unplugged as I write this. I don't want to taint the validity of my reviewing opinion by becoming subject to whatever AMG has to say about the band. But in any case, time moved on, and the night after the Tullycraft show I was at Neumo's for the first time since its reopening to see Aveo play. (A review of that show is still pending).

Summer Hymns had just finished a mediocre stage-banter ridden set when I spotted Sean in the same white jacket I had seen him the night before over-looking some Elf Power merch. In all of his gallant affability he came over and said hello and thanks for coming out to the show the night before. I told him it was no problem, I really enjoyed the show, I had just called my girlfriend actually and was telling her about the show because her favorite band is the Beach Boys and I thought she would really like another poppy, drive-around-the-beach-with-the-top-down-and-a-Fresca-in-a-cozy-band. He laughed, said he loved the Beach Boys as well, and asked me to write down my address so that he could send me some of their albums since I didn't have any of them. So I wrote down the directions the post office would need to make sure the package found its way to a suburban home in suburban Puyallup, and today it arrived.

I listened to the newest record, Beat, Surf, Fun in the car while running some errands and then again later while my sister and I drove up to South Hill to see a matinee of the new blockbuster Troy. (While Brad Pitt was badass as always, I have to wonder what Orlando Bloom would look like without his phallic bow and pouch of arrows; why doesn't he just cowboy-up and do the romantic comedy we all know he wants to do?)

Sean also sent me The Singles a collection of 7" tracks and the like from over the years, as well as Six Cents and Natalie When Punk Fell to Earth, both of which made it into my headphones later in the day as I walked the dog and wrote some emails. When Punk Fell to Earth, Sean told me via note, "is a collection of lo-fi songs [he] recorded in [his] youth." The collection is actually quite more enjoyable than his description of it makes it sound. Sean is in the same category as Elliott Smith in that his lo-fi recordings are not necessarily shittier than hi-fi. (Of course any Elliott fan won't dispute me in saying Roman Candle was some of his best work, be it recorded in a basement or not.)

So anyways, after a careful listening perusal, I have decided that Tullycraft's recordings — they're currently working on a fourth full-length — is exciting and loveable, just like their live show.

As I was saying in Thursday's letter, Sean Tollefson plays a light blue bass with only two strings. Chris Munford, meanwhile, plays a killer archtop guitar with six strings most of the time and five some of the time, as he breaks strings so often that there is even a "broken string song" that Sean alluded to playing a couple times before finally playing it on the third broken string. Well-practiced at the winding and bending of new strings, Chris was able to get restrung and retuned before a second verse.

Harold Hollingsworth plays another guitar and doesn't break strings, but at the show I caught at the Crocodile, he did talk a lot, albeit without a microphone. One of the things about the band that I found so endearing was that they talked to each other a lot on stage, and didn't seem so caught up in performing or acting like "rockstars." Jeff Fell, behind the drum kit, had a microphone, but he didn't talk as much. He did rock out the drums though.

But of course it wasn't just broken string songs. Tullycraft's part
icular niche of likeability is their reality. They aren't a "surf band" or a "pop band" or a "shit band," they are one of the few original "good bands." They aren't breaking down any musical barriers with their chord progressions, nor are they rewriting Shakespeare with lyrics like "Does the world really need another orange cake mix song?" — but that is exactly the point.

Tullycraft is one of the last fun bands in indie music. In record stores now it seems like I always find myself trying to be intellectually challenged or something by music. The new Iron and Wine album, for instance, which I love like a glacier, has lyrics that move me and challenge my emotions. But it's not a FUN record, not really. Neither is the new Helio Sequence, (review pending), although I also love that record because it is so musically complex and challenging. But it's really only part of the time that I want to listen to something that challenges me. A lot of the time I find myself digging through my hundreds of cds and records trying to find something FUN to listen to. And usually it's either Teaser and the Firecat by Cat Stevens or Utopia Parkway by Fountains of Wayne. But mostly it'll be buttrock.

Tullycraft breaks down that wall and fills for me that ever-yearned-for space for a band that is fun YET challenging. The lyrics are goofy and witty and funny, for instance, in "Beat, Surf, Fun's" opener, Sean sings, "Fuck me, I'm twee." What the hell is "twee?" Can anyone define it? I can't, but I want to be "twee" too.

The music is simple at the base, yet Tullycraft tweaks the expectations of pop just ever so slightly that there is a touch of originality to their compositions. They're a band that is original by being simple, getting at the base of everything that music was meant to do in the first place: Give people pleasure. Listening to Tullycraft is FUN. I sing along, I clap by hands to the beat, I roll the windows down and swing my can of Fresca about above the gearshift, not caring whether it spills and leaves me with a sticky pop-puddle or not.

Tullycraft is a band that makes you smile. In their live show and in their recordings. When they perform, they apologize a lot for making mistakes in the music, or for not changing strings fast enough… basically just for being human. And that's their music too, it's human, it's basic, and there's not a damned thing wrong with it. It's comforting to have something so pure and unviolated by trying to be the next Radiohead (attn. Coldplay)

They're fun, and that's really the heart and soul of the matter. If you don't believe me, look in the mirror, and sing, "Fuck me, I'm twee," and then do some "Doo, doo doo, doo, doo"-ing for awhile. I guarantee you'll smile.