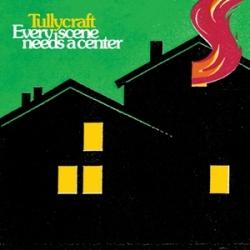 Every Scene Needs A Center

"The Punks Are Writing Love Songs" opens Tullycraft's latest release, and it's not much of a stretch to call it "Tullycraft Wrote A Punk Song." There's something oh-so-Tullycraft about the subject—punks "mixing up the bag" by writing love ballads. But what's most important regarding this really quite amazing song is its subtle declaration that Every Scene Needs A Center redefines these Seattle vets.

Go back and listen to openers off other records: "Twee" (from 2003's Beat Surf Fun) and "Stowaway" (from 2005's Disenchanted Hearts Unite) and you'll see the difference in just the first notes. Like many Tullycraft songs, these and "The Punks Are Writing Love Songs" begin with unaccompanied guitar chords. In the case of the previous two records, the pulse of Fender Strat shimmering with tremolo and bridge pick-up softness (read: every indie-pop band's favorite guitar tone) established the upbeat playfullness of the record to come. "Twee" and "Stowaway" are, to be blunt, really fast, really pretty, and really, really catchy. "The Punks Are Writing Love Songs" on the other hand begins as if Ted Leo and his Pharmacists were behind it (i.e. really fast and really catchy and really not-so-pretty). It's only when Jenny Mears joins in with her harmonies at the end of the first line that it's clear this is Tullycraft.

Progress is a good thing, but let's not over-analyze (at least not too much). For beyond the subtle metamorphoses of instrumentation and style that time necessitates, what we're introduced to with "The Punks Are Writing Love Songs" is a wonderful new record by a wonderful Seattle band. While Disenchanted Hearts Unite remains Tullycraft's best record (but not by much), what we have in Every Scene Needs A Center is a new tact: the female harmonies have come into their own as a full-fledged member of the band, and guitarists Chris Munford and Corianton Hale seem to have discovered a new level of distortion enjoyment within themselves. Tracks like "Georgette Plays A Goth" and "Neutron" take a feedback-ing heaviness at parts that's a new addition to the tool box.

And that's not all. Back-up singers are all over the record including members of BOAT, Patience Please and even some imaginary friends. Even fellow-Seattle indie-rockers Saundrah from Math and Physics Club lends her trusty violin and Evan from "Awesome" supplies trumpet.

In a truly just world, "Bored To Hear Your Heart Still Breaks" will be a number one single on college radio and destroy both Chris Carraba and Conor Oberst's careers (sorry igLiz). Beginning with a gentle ukelele, the song takes on a '50s sock-hop vibe, and tells of the emo-kid writing songs of sadness that are a "bit too precious for us" and… well, read the title and you get the idea. There's a great "we know, we know, we know" refrain, and all in all, one can't help but think it's the best Magnetic Fields song Stephin Merritt never wrote. (Someone call Volvo!)

As for the greatest Tullycraft song ever written, we're given that as well. Seven-and-a-half minutes of piano ballad meets classic Tully-rock on "Dracula Screams Of Tiger Style (Parts One And Two)." It's their "Layla." Lyrics of absurdist comedy, melody and harmony and happiness commingle in a highlight of any album, not just this.

While as a whole Every Scene Needs A Center lacks a certain fluidity that made Disenchanted Hearts Unite so perfectly a unit, what were faced with instead contains a collection of incredible songs that, given the fact no one's going to be listening on vinyl, can be enjoyed with the same enthusiasm that emo kids "blame the stars" for heartbreak.