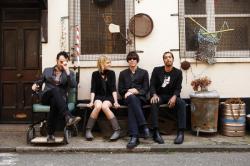 Metric at the Showbox at the Market

The first thing that is obvious about watching Metric live is that frontwoman Emily Haines is an unlikely rock star. At least on the surface.

When she walked on stage for her band’s kick-ass set at the Showbox at the Market she was dressed in an over-sized Jimi Hendrix t-shirt. It looked more like she was staying in for the night watching television at home. She’s gorgeous, but not glamorous. But make no mistake: Haines is a rock and roll goddess in every sense of the word. She just doesn’t dress the part. Yet she has a commanding stage presence and every ounce of charisma that Karen O has.

It's been over two years now since Metric has put out a proper album (although they did re-release their debut Grow Up and Blow Away this year and Emily Haines released a solo record). She did tell the crowd Tuesday night that they've spent a lot of time at Bear Creek Studio (in Woodinville) recording a fourth record, so she said this was like a hometown show for the band (even though they call Toronto home).

Many of the songs they played were new and unfamiliar – but were definitely Metric songs. They used different time changes and avant-garde (seemingly free-association) lyrics behind a solid wall of sound. Think of Shirley Manson singing vintage Beck’s lyrics behind the tightest prog rock band you can imagine and you will come as close as possible to realizing the genius that is Metric. My favorite of the new songs, found via the wonders of the internets, is called "The Hooks" and has the clever and memorable line “Meet me at the gates of hell, I’m on the guest list” and asks the most important question facing rock nerds, “who would you rather be, the Beatles or the Rolling Stones?”

Haines told us that a typical Metric crowd is made up of “ninety percent musicians,” which is unfortunate but understandable. They make records when they want to, and none has really been a big seller in the US. While it is a good feeling to be in the elite 10% minority, the greatness of this band should not be a kept secret. Of course, that was of no concern to anyone inside the Showbox this night. Haines told the audience that basically the next Metric record will be done when it is done and when they’re ready to release it and fuck anyone who isn’t satisfied with that.

There was a fascinating chasm with the crowd’s reaction to the old and new songs. When the band played new songs that haven’t appeared on any album, the audience was attentive, trying to digest and absorb them. When they played a familiar song like crowd favorites “Monster Hospital,” “Combat Baby,” “Dead Disco,” and “Poster of a Girl” damn near everyone in the place was dancing and singing along and jumping up and down.

Metric fills up every square inch available to them and every song feels epic – as though a big club like the Showbox is still too small of a venue to contain their sound. The biggest cliché in indie rock is “this band should be huge, why aren’t they?”, yet when discussing this band it's a legitimate question. The problem isn't that the people who know how good this band is are keeping it a secret; it's that the larger record-buying crowd isn’t listening. Still, if you asked any of the 1,100 or so people at the Showbox Tuesday night, they'd surely say it's their loss.