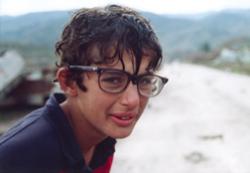 "They have to learn how to fight now."

A beautifully wrenching and refreshingly truthful film (the first to be made in Iraq since the fall of Saddam Hussein), Turtles Can Fly is set in a Kurdish refugee camp on the Iraq-Turkey border on the eve of the 2003 US-led invasion. What makes the story so profound is that it deals with the war from a perspective the Western world hasn't really been privy to until now, introducing us to a handful of orphaned children surviving truly appalling conditions. Among them are a blunt and ingenious lad named Satellite (Soran Ebrahim), who has assumed a leader-of-the-pack role; the highly emotive and very funny Shirkooh (Ajil Zibari); an armless clairvoyant named Henkov (Hirsh Feyssal); and his quietly anguished sister Agrin (Avaz Latif), whose prior trauma has left her with an unwanted visually-impaired toddler to care for.

Kurdish director Bahman Ghobadi (A Time for Drunken Horses) uses an entirely non-professional cast to convey the nightmarish realities of daily existence: there's no running water or electricity, residents live in constant fear of attacks, kids use their bare hands to defuse land mines in surrounding fields. But childhood joy occasionally peeks through the gorgeous, heartbreaking images: a group of ramshackle TV antennas lining a high hillside, a beautiful girl waist-deep in dark water lighting a turpentine-soaked cloth, a small child wandering through a maze of stacked shell casings looking for his daddy.

Toward the end of the film, a US helicopter flies over a mortified crowd, raining down propaganda leaflets which state that the Americans "are here to take away your sorrows". If only the horrors of war and deprivation were so easily relieved.